How Consensys went from a handful of graphic designers to an 80+ thriving design practice.

When I joined Consensys from IBM, I had been in the blockchain space for about a year. Both at Consensys and in the broader Ethereum ecosystem design was not well understood at the time. A majority of teams had never worked with a designer at all, save for asking graphic designers to make their apps “prettier”. There were about 6 graphic designers at Consensys when I joined, and they were becoming burnt out: they didn’t have the tools they needed, putting the user first was unheard of, they would be asked to rebrand a product repeatedly when users weren’t showing up. They worked in an agency format, small projects would be requested but designers were not embedded nor accountable to product teams.

Consensys has historically been a hybrid of consulting and a product incubator—the overarching strategy in the was to experiment quickly and educate as much as possible. The teams were remote first, in almost every time zone, and the company strived to be self-organizing and flat. By the time I arrived in the summer of 2017, the company was about 200 people, peaking at over 1400 by the end of 2018—needless to say we were scaling very fast.

However, the products that were being funded had no validation process—no research, prototyping, or testing was being done. Many product ideas were flimsy use cases, pushed forward simply because they utilized blockchain technology. It was no wonder many weren’t getting traction or users.

In my first months, I set about researching and talking to people throughout the company. I got an idea of the level of design literacy and the pain points of designers, as well as product teams’ through 1:1s and office visits. I learned that whatever I came up with would need to respect individual and team autonomy—values in the very fabric of the crypto space.

Because design was not well understood, I made videos to start normalizing the idea of product design and an offer to help autonomous teams hire their first designers. This allowed the start of a hybrid design practice—embedded but also partly centralized. 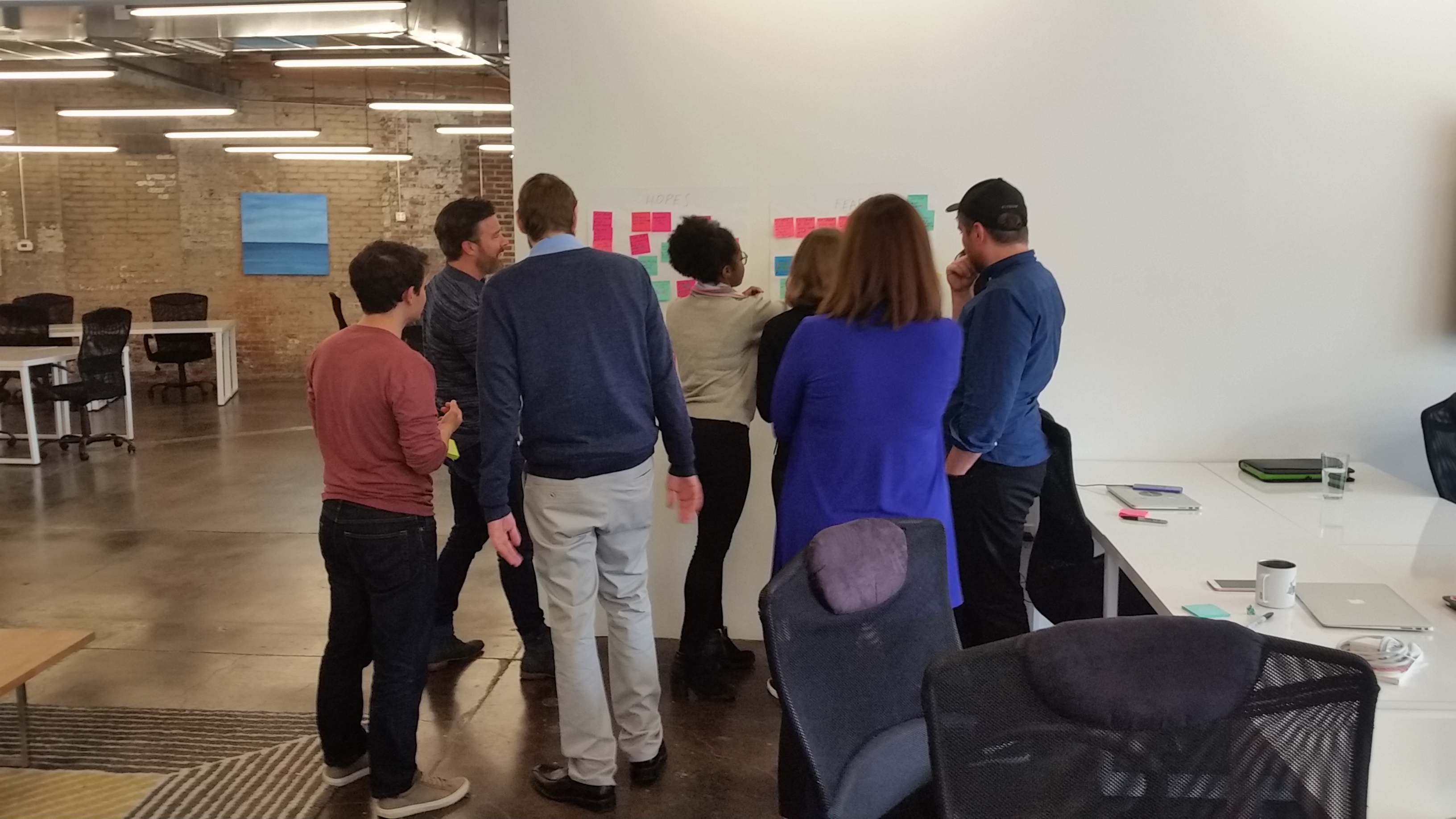 For many teams I did design thinking workshops to get the ball rolling, foster trust, and show them where a designer could fit on their team (this was by far the most effective strategy, but not as feasible for me with 50+ product teams).

I began to develop a vision for design at Consensys: a high impact, modular structure that could be flexible with the rapid change and ambiguity that would yield high quality user experience.

By embedding the designer, teams felt that the designer was on their team and their effectiveness was much higher—design was no longer being treated as an add-on service. The centralized design community allowed for designers to share, support each other, and get critique. It was an effort to have one’s cake and eat it too—all the autonomy and leadership of being on a start-up, but all the benefits of being on a large design team at the same time. I found that this made recruiting easier as well—many of the senior product designers I interviewed described this as their ideal set-up and were eager to join.

I developed job description templates, salary bands, and leveling so that designers would have a career framework and growth. This was all documented in our github repo (inspired by the transparency of Cap Watkins’ levels at Buzzfeed) so that designers could contribute, comment on, and see all edits made to the levels. 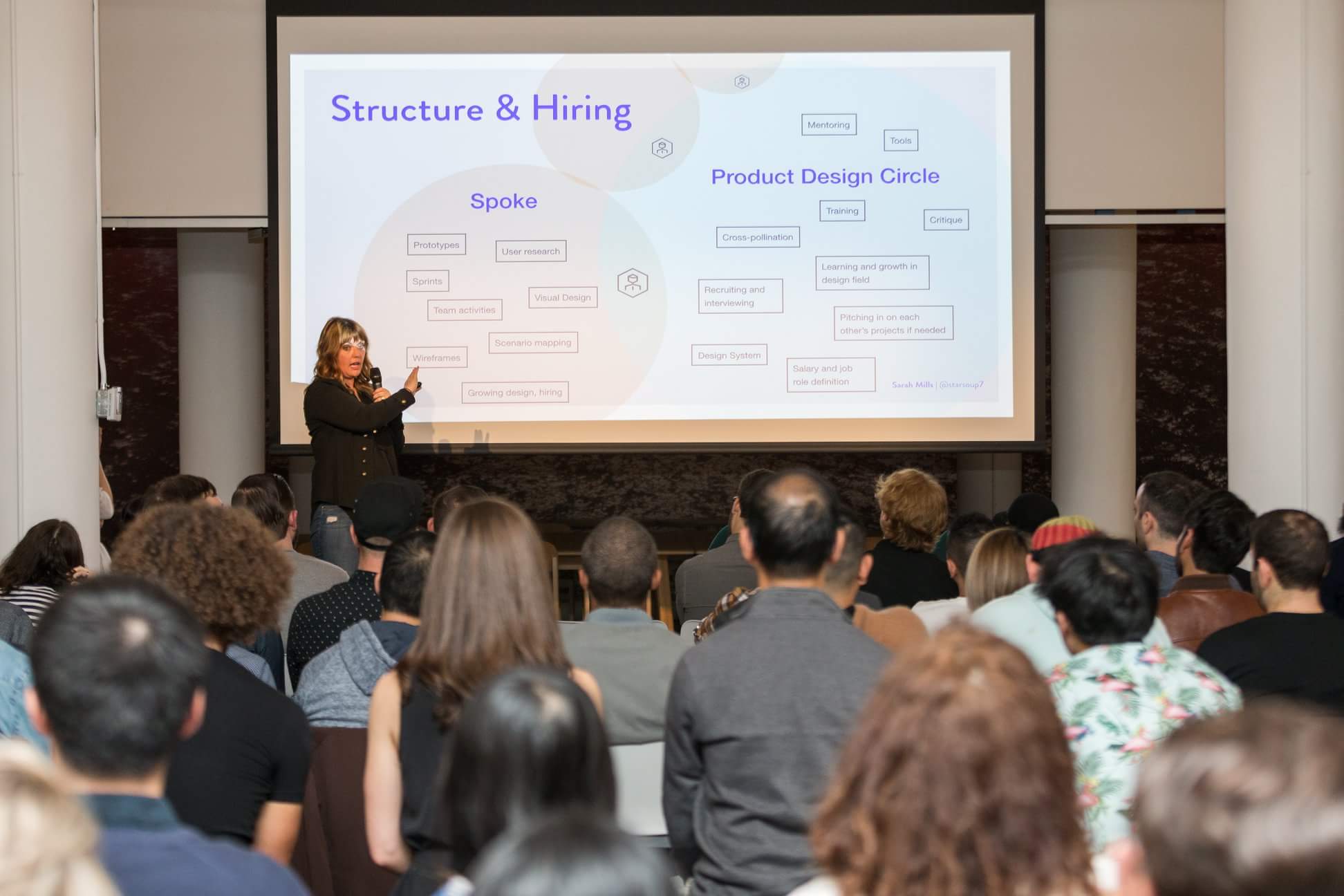 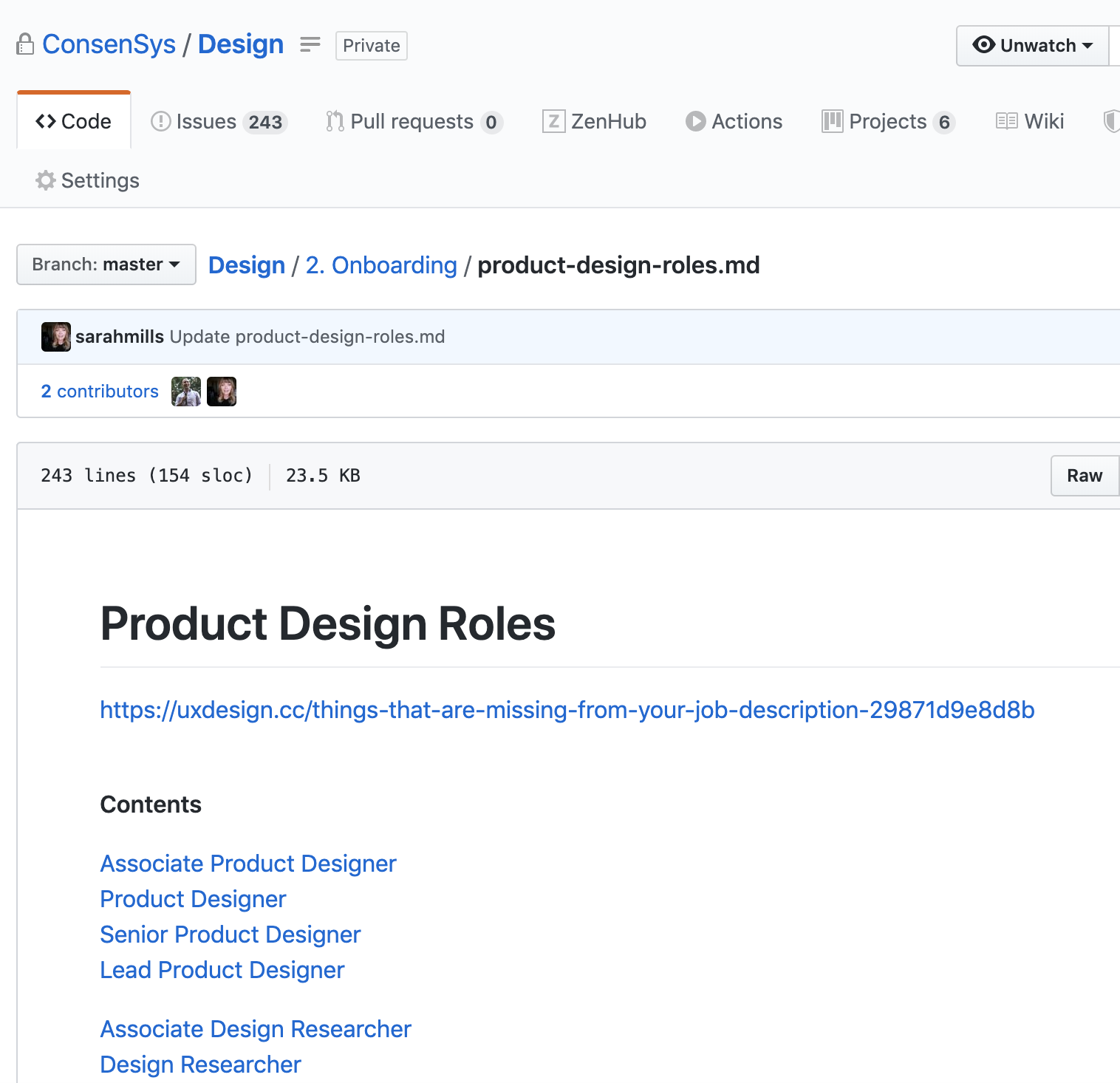 Filling in the skill gaps

Next, I hired a design research director and a design thinking director to expand our capability and help teams synthesize and start basing product decisions on design research and data. To kick this off, I invited 4 of the more established infrastructure teams to a 3 day workshop. They had similar user personas, so we were able to invite actual users in for participatory design. In the workshop, everyone, including engineers, was performing user research face-to-face and the lightbulbs went off! These teams in particular were very influential in the rest of the organization, so word spread quickly that design thinking and design research were now a thing. 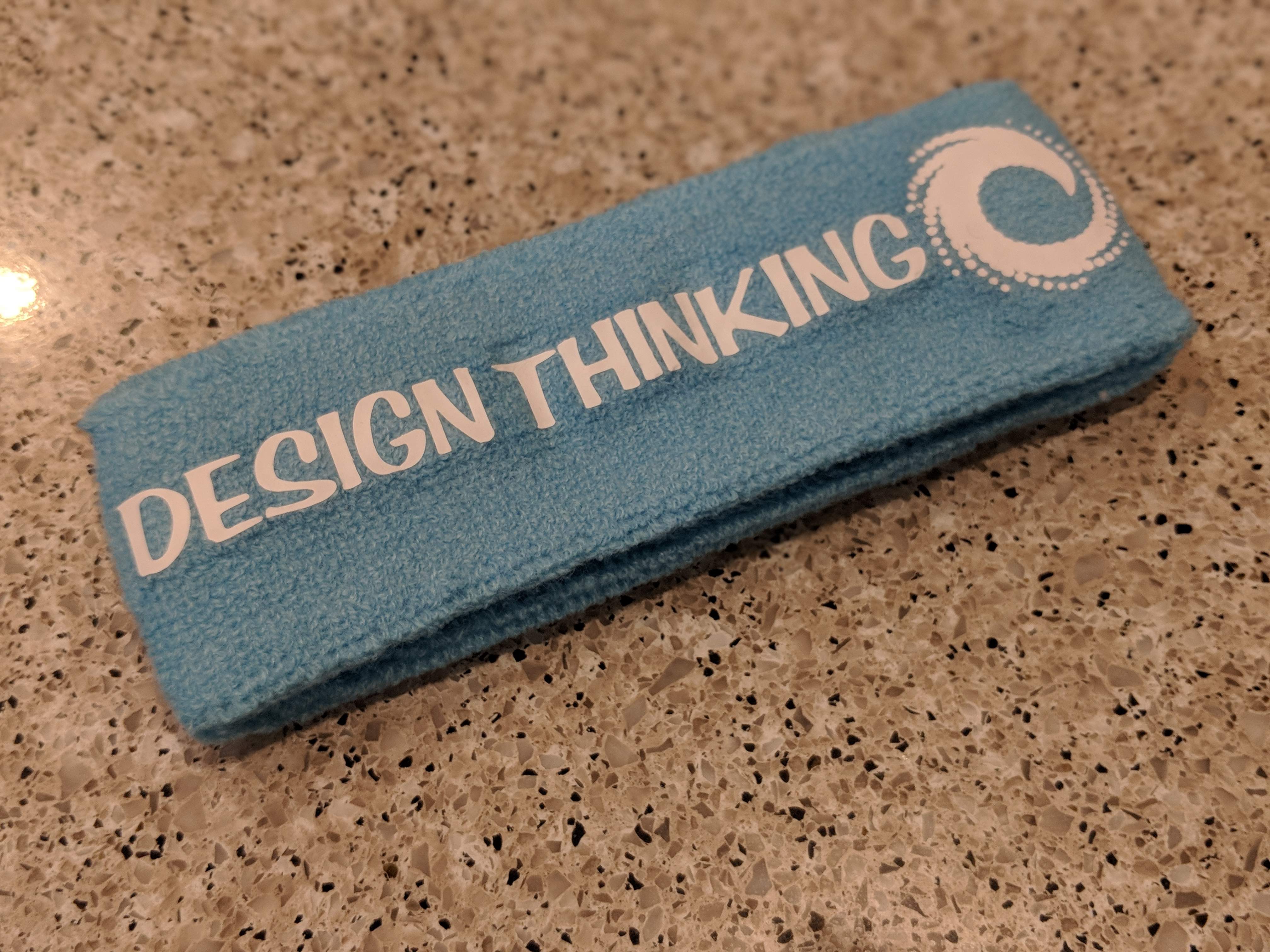 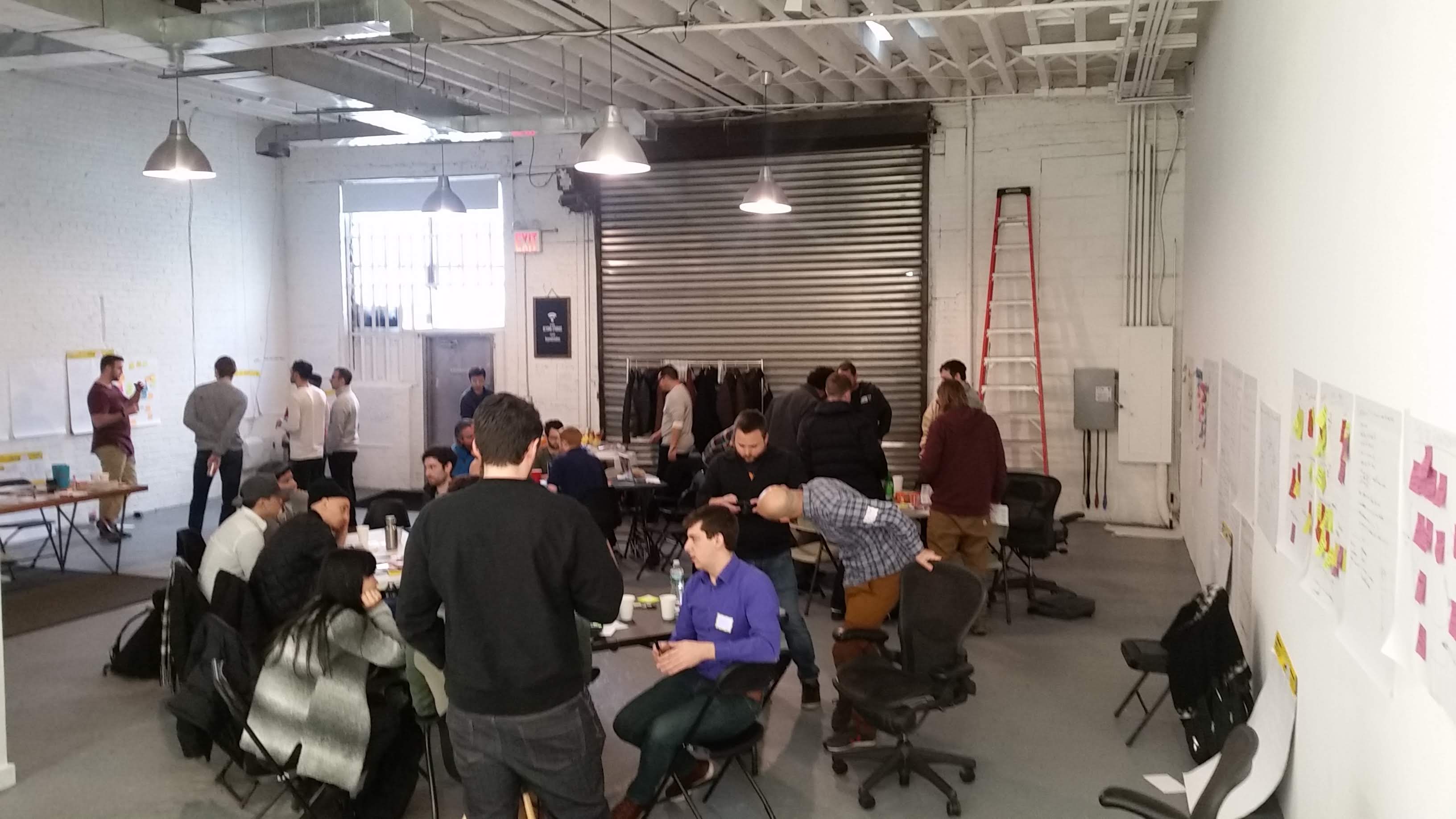 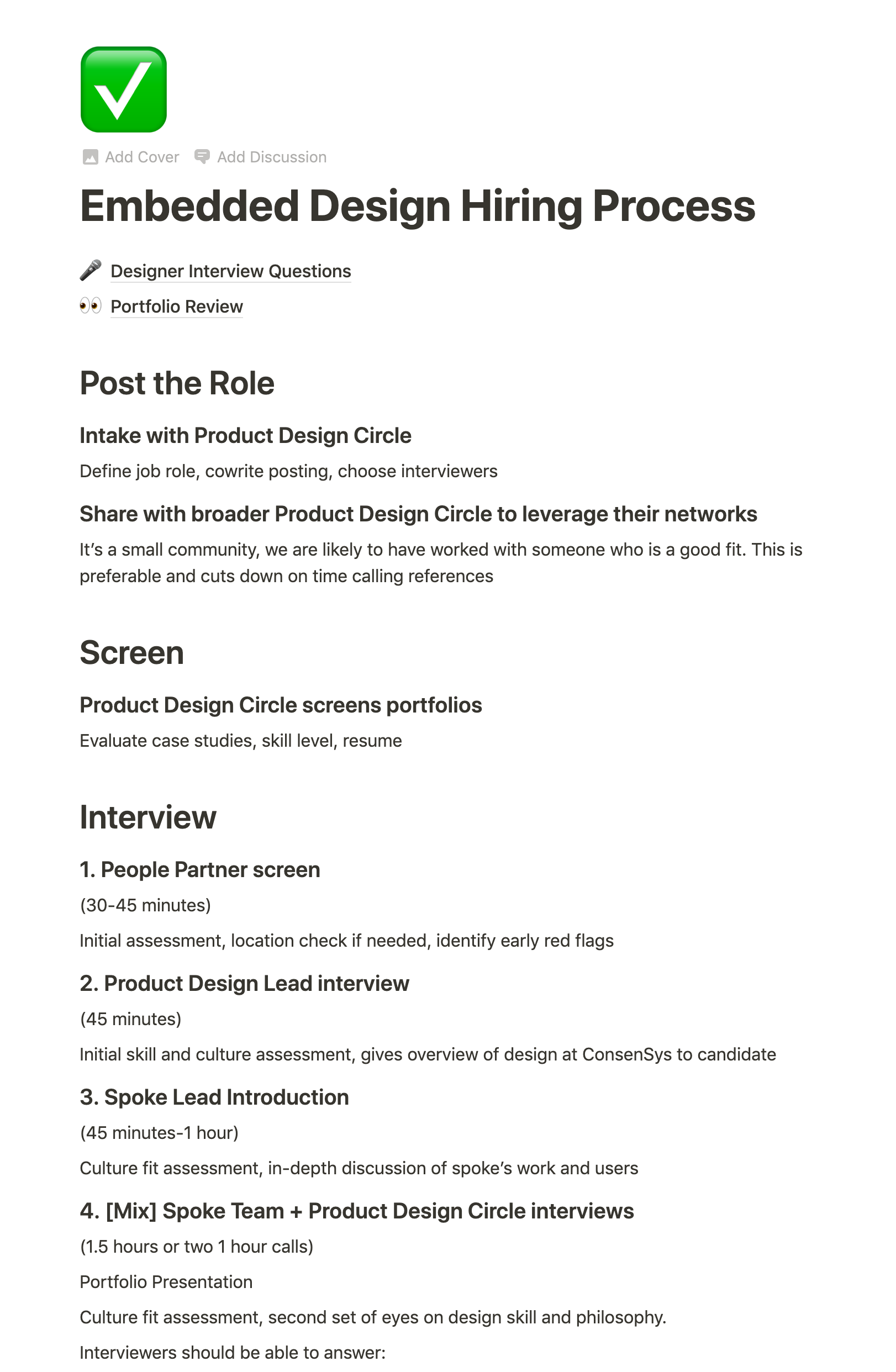 I developed and iterated on a hiring process, working with my HR partners. Because I framed design hiring as a “service” to discourage teams from hiring designers by themselves, the process needed to be collaborative. I would have initial calls with team leads to discuss the process and learn about their hopes and fears. Because each team was unique—with their own sets of users, problems to solve, and culture—I would present a template hiring process and job description. This saved us from reinventing the wheel when we needed to move quickly: we could start with baseline expectations and jointly modify to fit their unique needs for the role.

However, I noticed that many teams were still leaning heavily towards designers with very strong visual abilities, but light on other UX skills. To mitigate this, I added a part of the process where the entire team (developers, PMs) needed to attend the portfolio presentation aspect. They needed to witness the problem-solving walkthrough and discussion, not just how attractive the solution was.

Eventually, we were scaling too fast for me alone to maintain both quality of candidates, and quality of the candidate experience. I was able to hire a design specific recruiter and we worked together to keep iterating on the process, begin targeted sourcing, and bring more lead designers into the evaluation process to develop their leadership skills (and take some of the weight off of me).

While we leveraged our own networks, it was imperative to attract diverse candidates globally. We launched our website, dribbble, and twitter further helped us get our message out. I refined our messaging and developed one-pagers: detailing our design culture for recruiters to send to potential candidates. 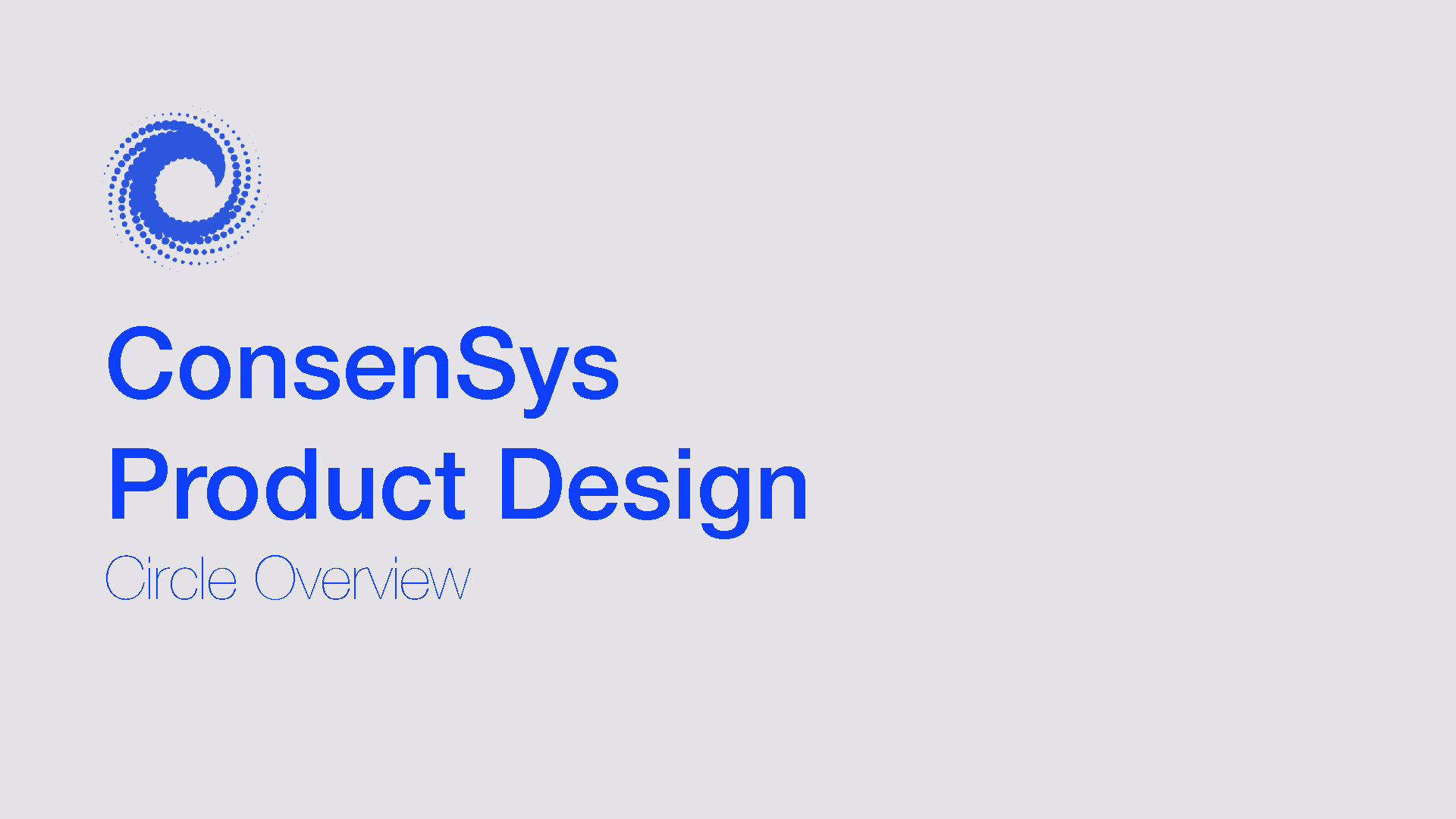 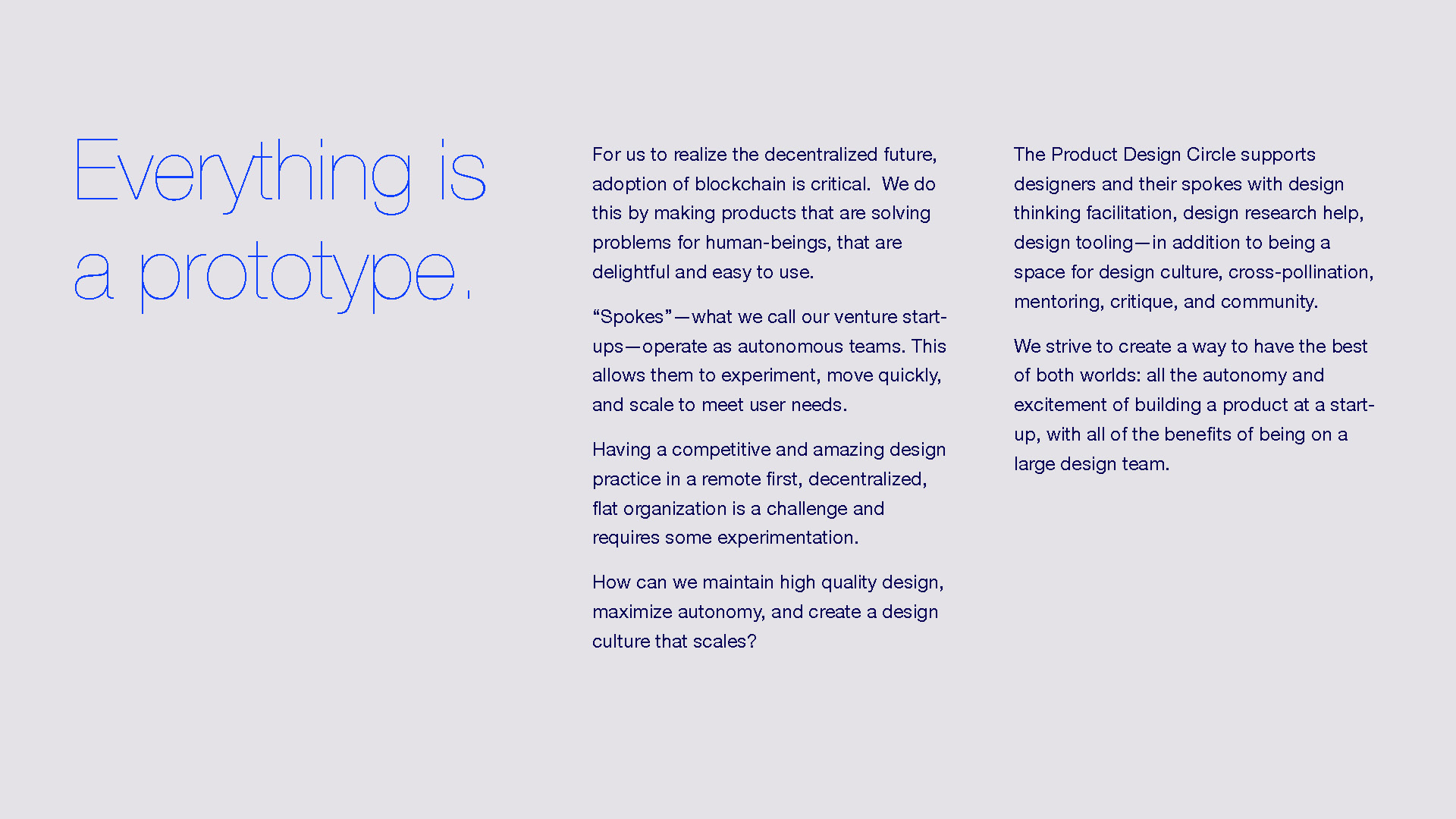 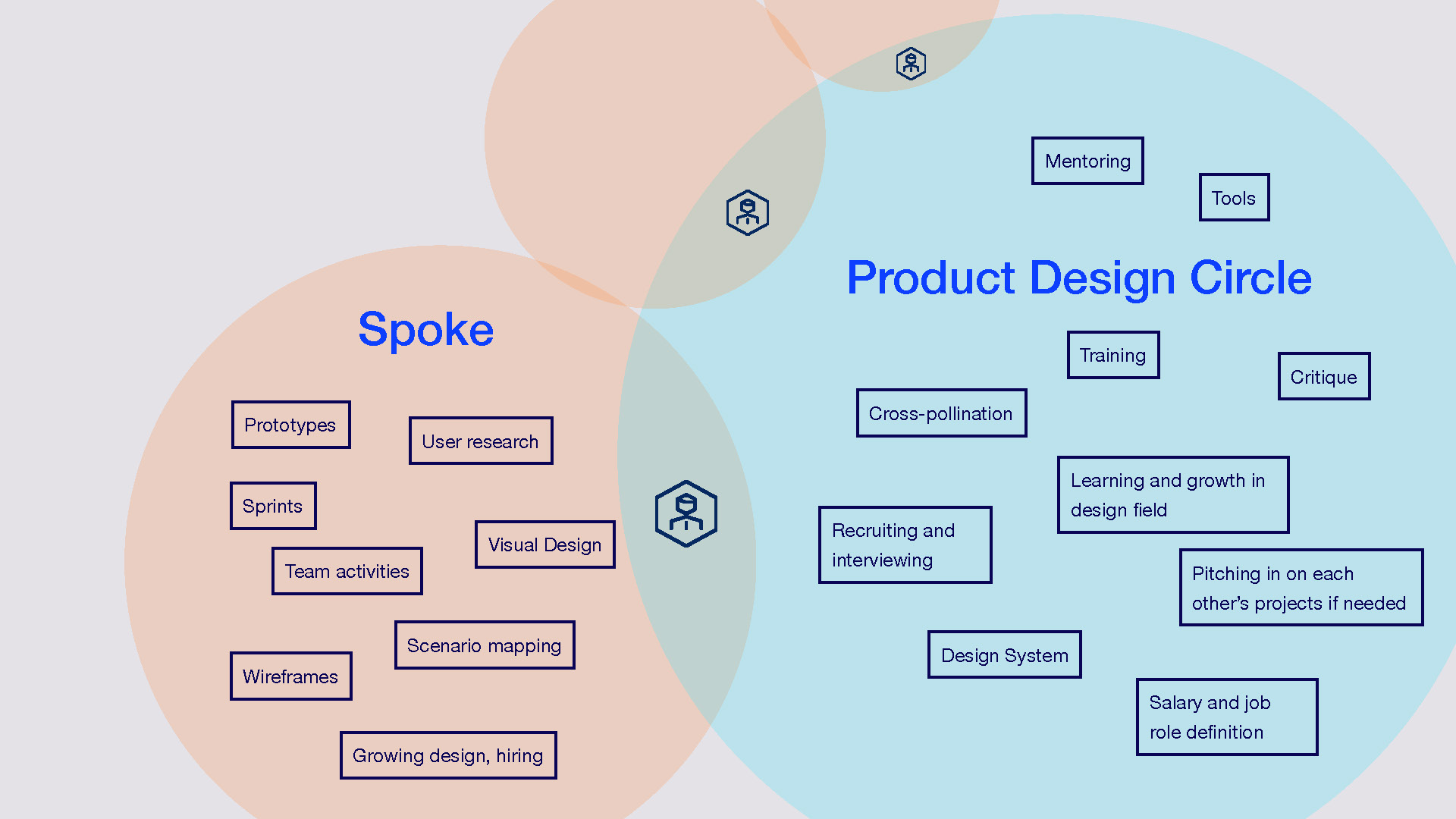 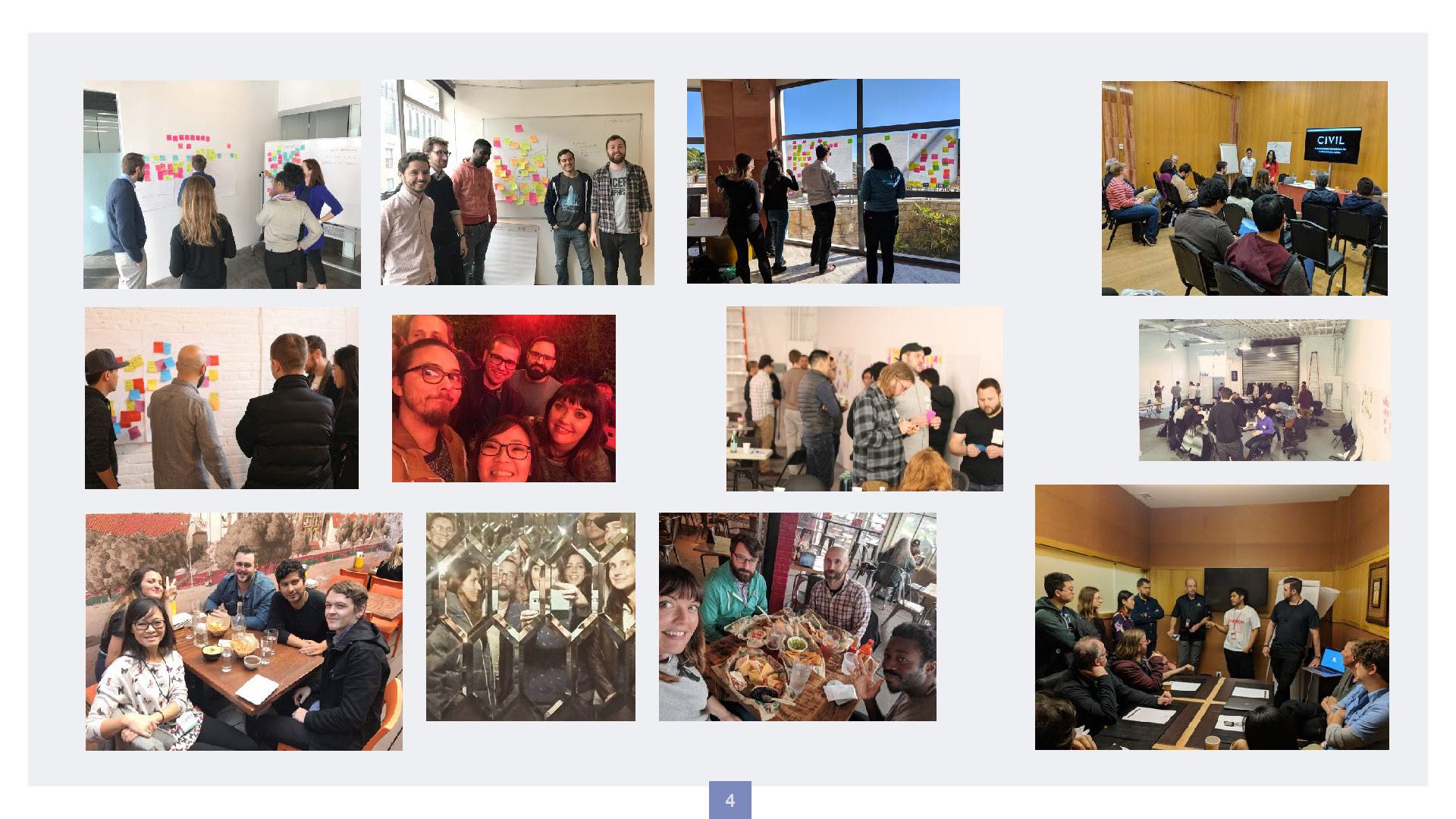 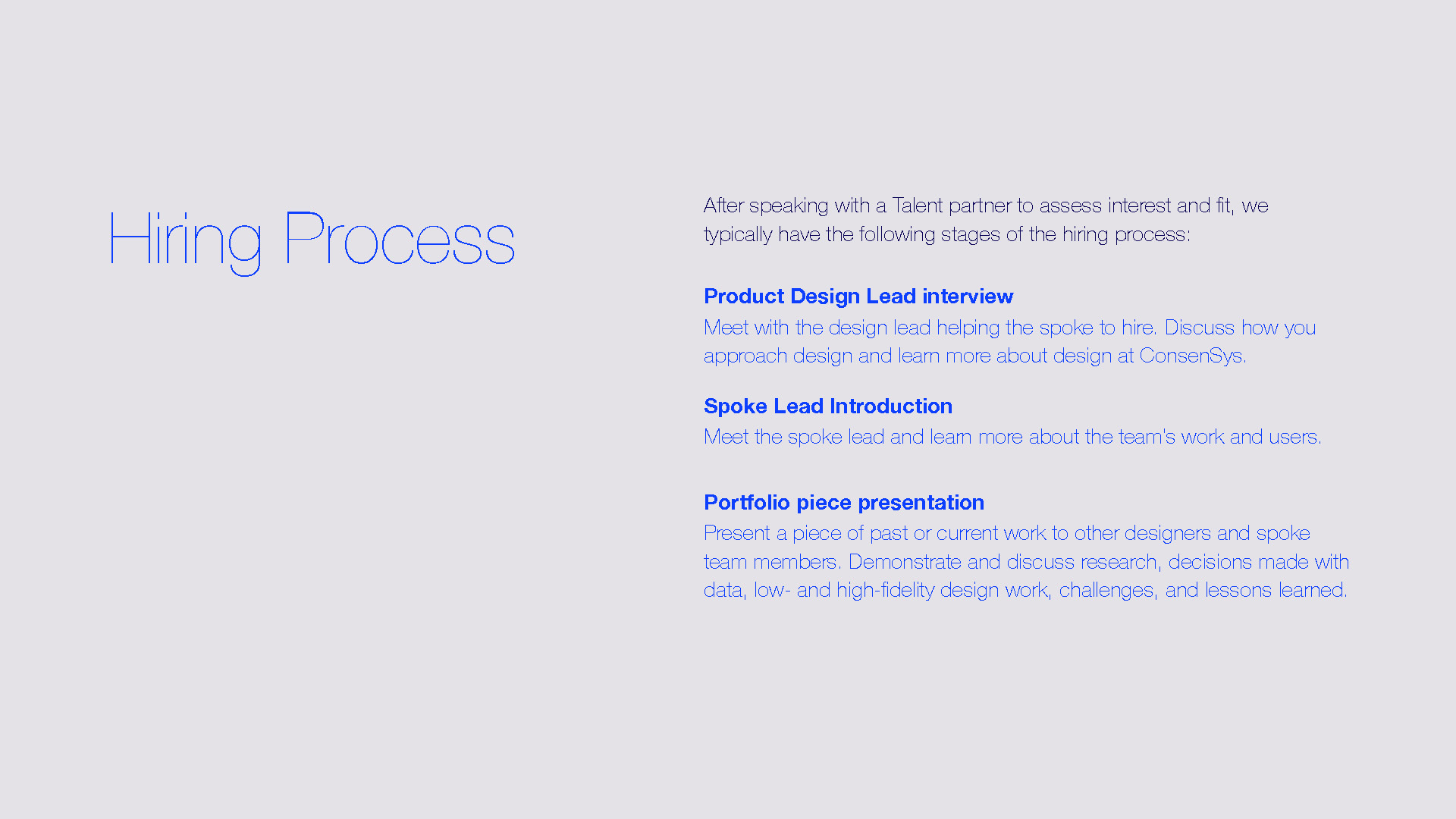 Finally, the success of the embedded product designers, workshops, and research allowed us to prove the value of design, and do the most important thing: get in front of the product ideas before they are funded. I recruited a cross-functional team that ran workshops in cohorts within the incubator, ensuring a higher likelihood of success. By the end of 2018, almost all products had an embedded designer, and a few allotted budget to hire a design researcher as well. We scaled to over 80+ designers across design ops, brand, product, research, and design thinking teams.

Here are some examples of the amazing work the design team has done: 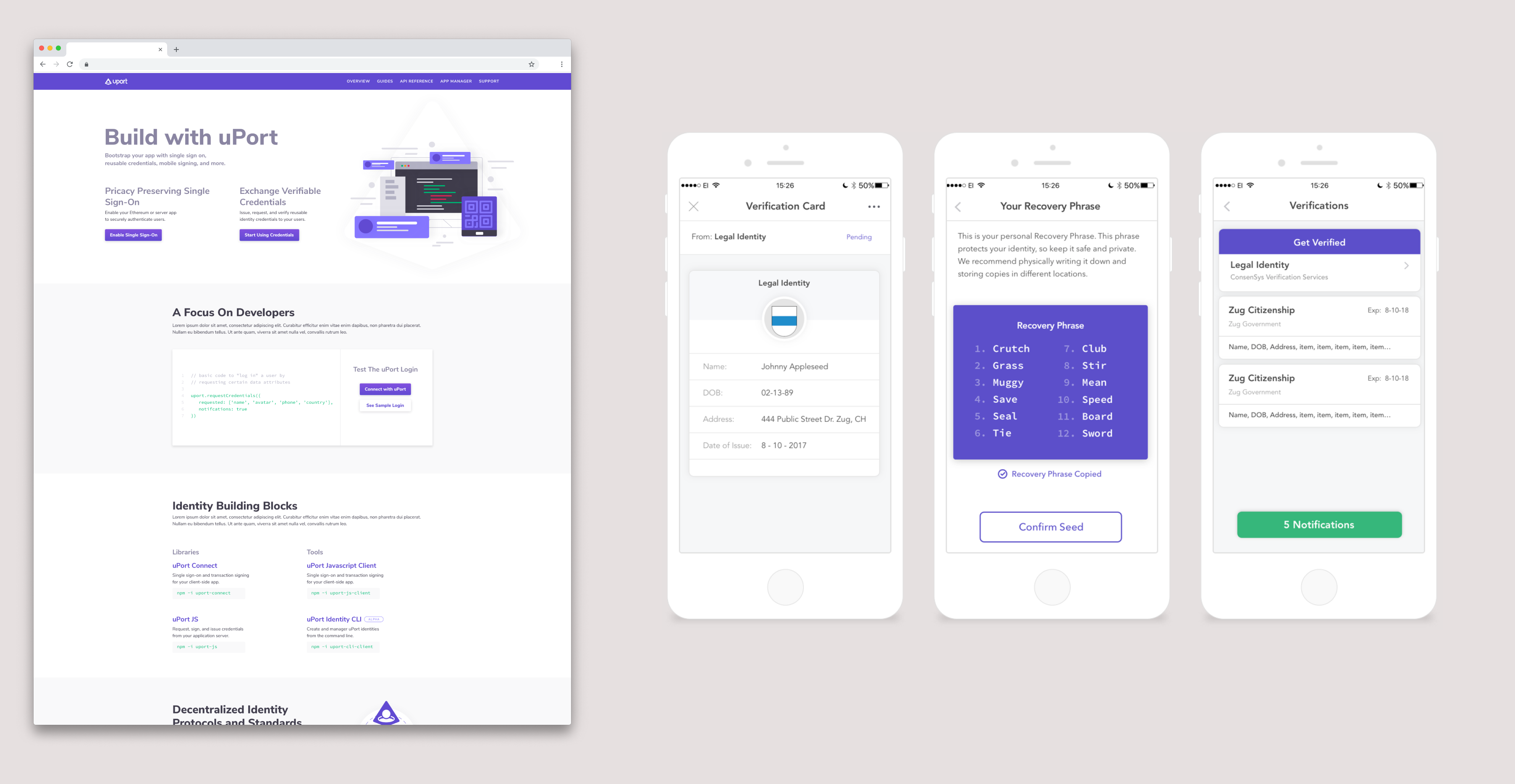 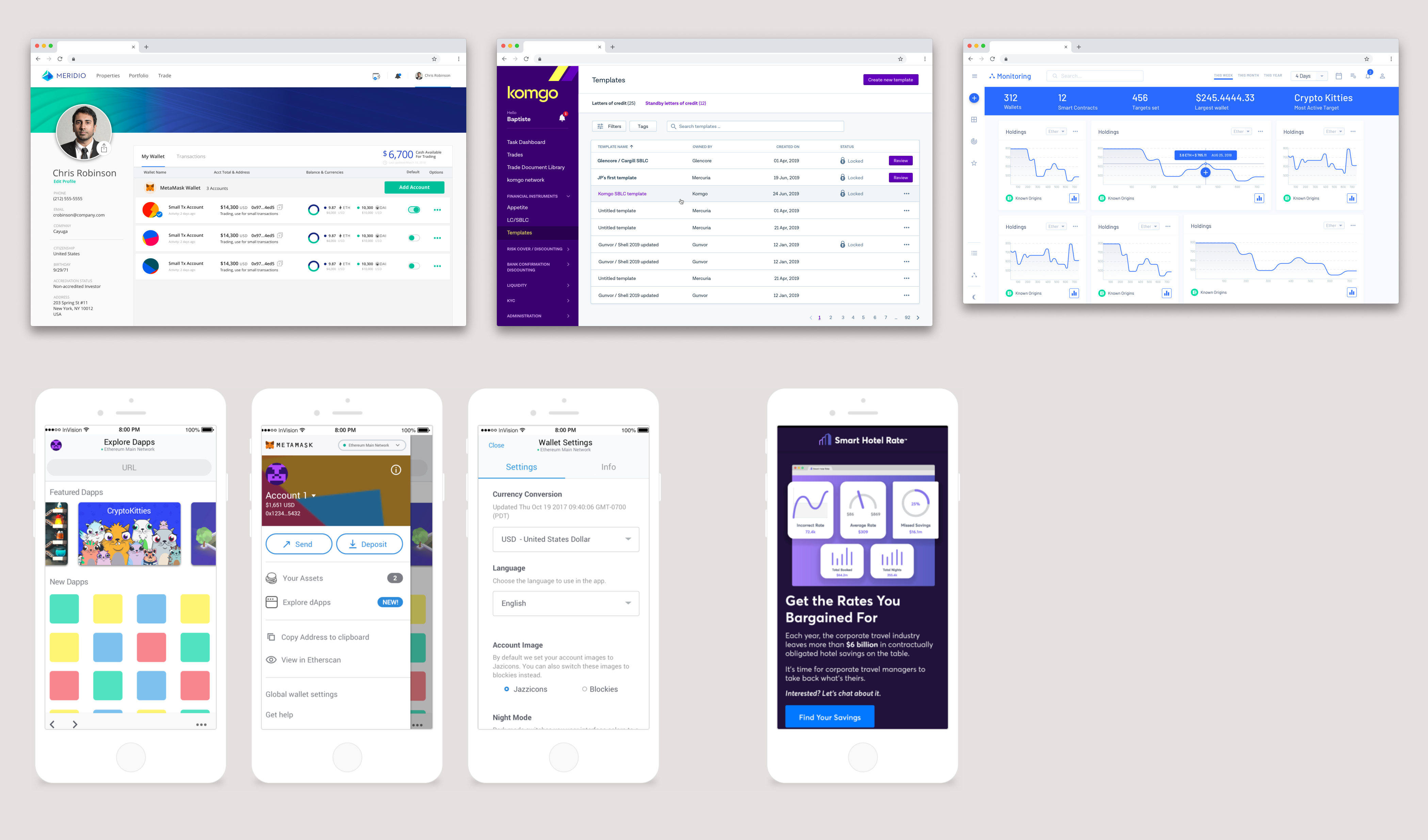