Solving digital identity problems was by no means a new space when I began work with the Blockchain Identity team. Digital identity was rife with complicated problems already: not only security issues with centralized providers, but complications with biometrics and other identifiers (such as older users losing their fingerprints over time and being unable to receive benefits as with India's Aadhar system).

The introduction of the potential of blockchain technology to address the security and centralization issues was exciting, but didn’t address the surrounding analog problems. There are many layers, needs, special edge cases, and dangers that still needed to be solved for, in addition to the data decentralization and ownership blockchain could provide.

Like many blockchain initiatives, success would be achieved through collaboration of many groups, or consortiums of companies, not just one organization implementing the technology. The benefits would not be realized unless we could demonstrate value to governments, large corporations, and end users—all at the same time.

Much of the design problem to solve was just as much researching with potential users and prototyping as it was listening to the pain points of large organizations and collaboratively solving and exploring together.

A large part of that was story-telling: showing the problem as it exists today and showing what could be possible if these organizations chose to work together. I made illustrations and wrote narratives to show not only the technological implications, but the effect on people’s lives. 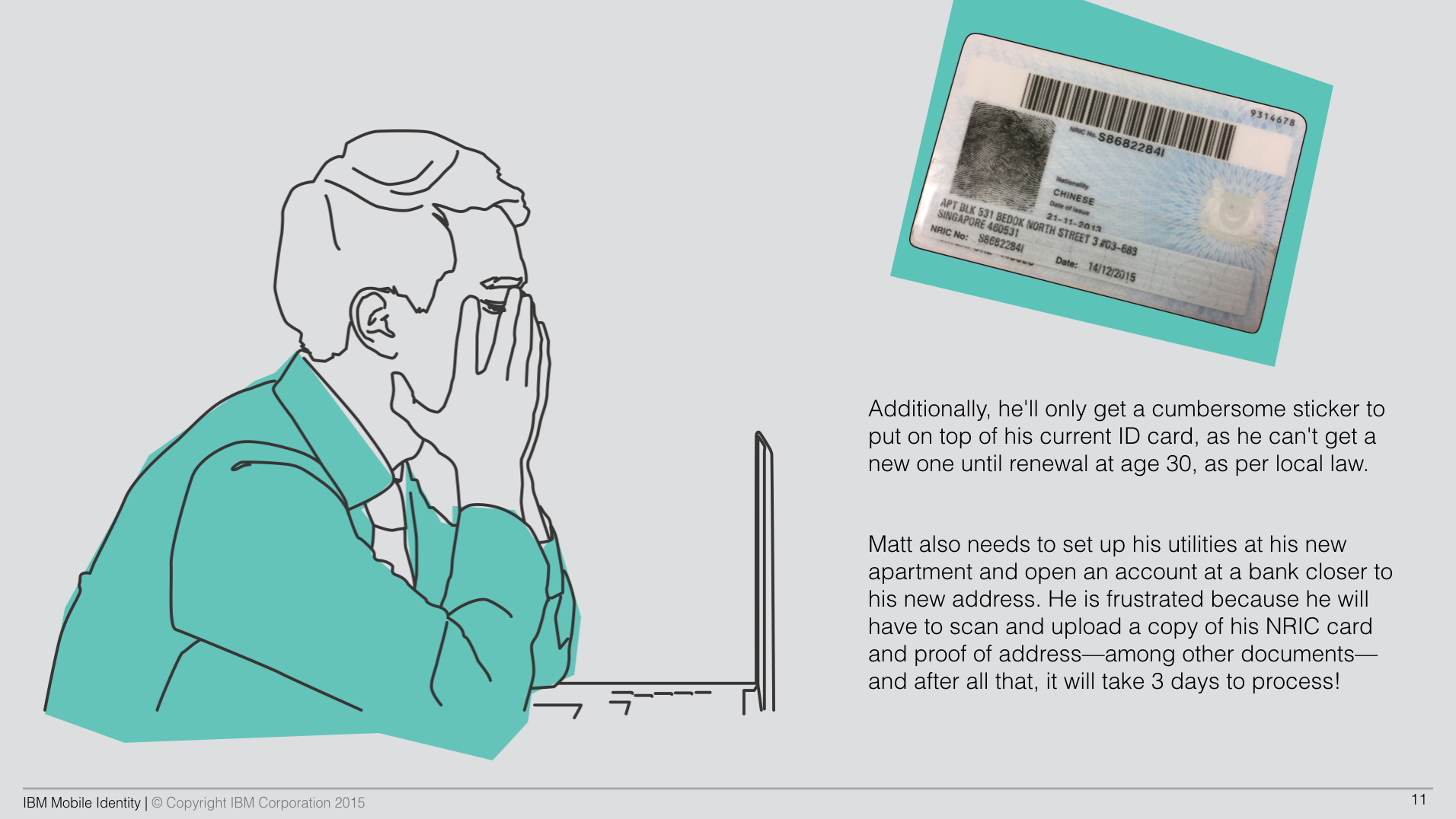 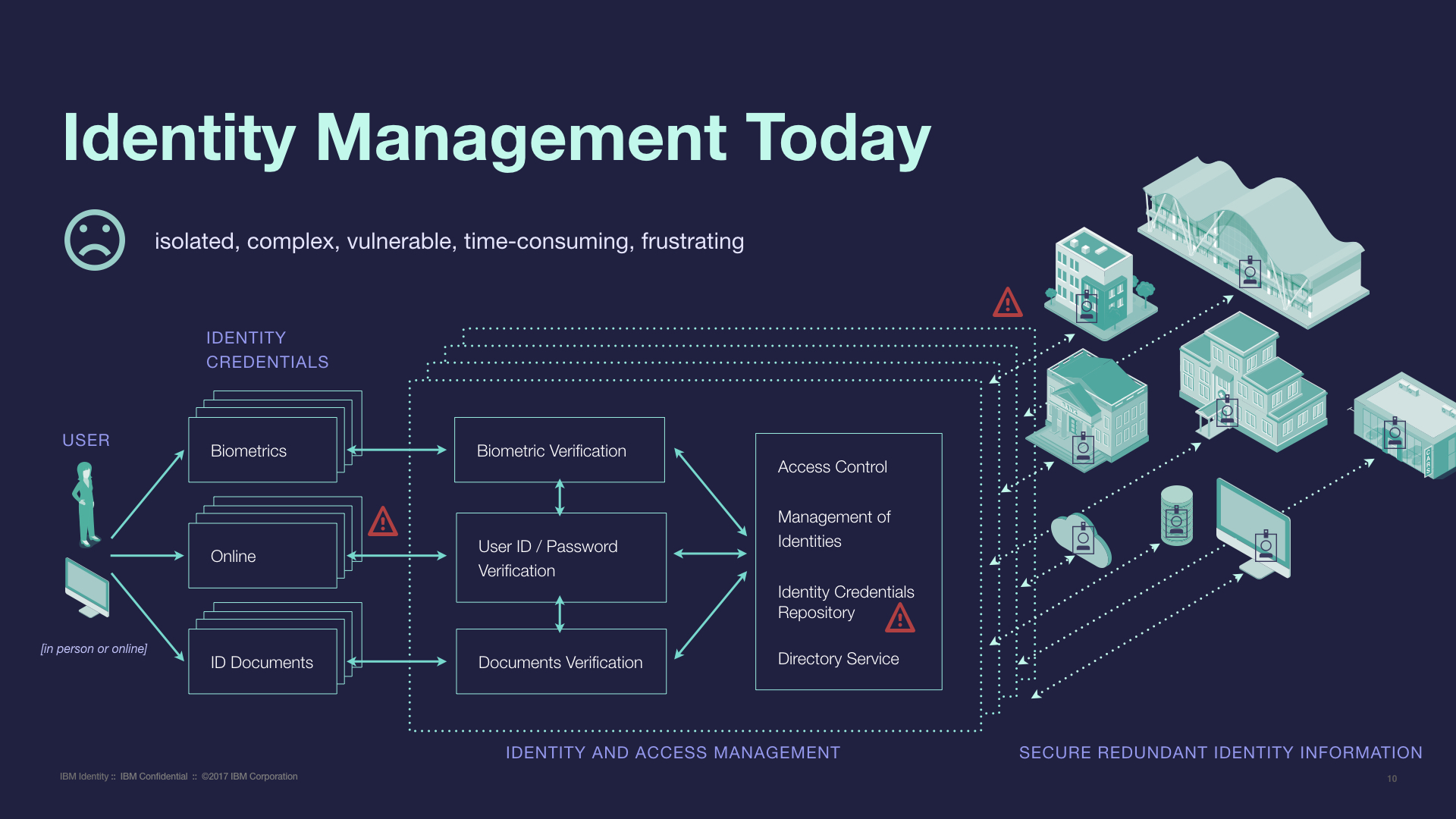 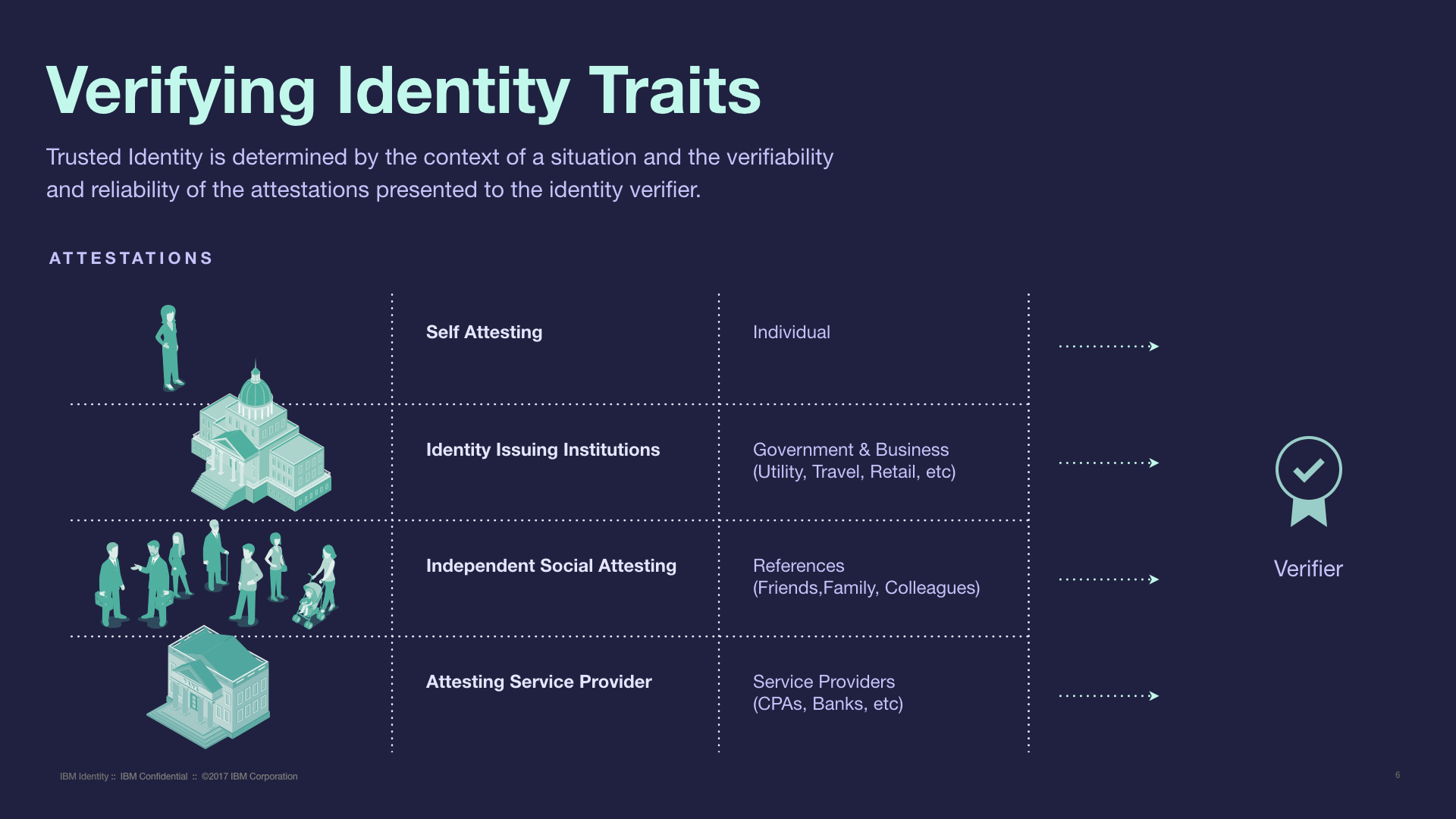 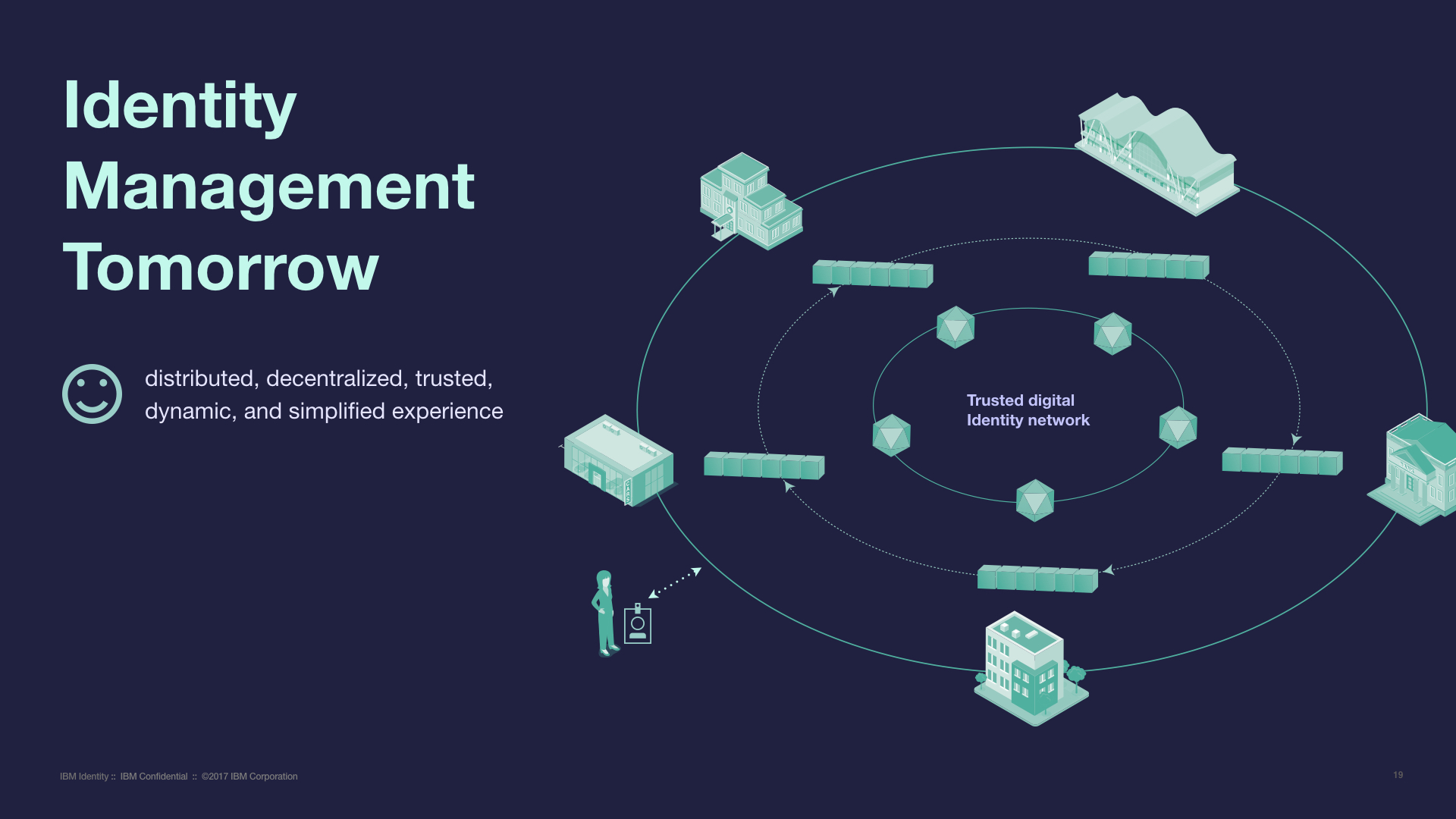 Next, our team was chosen to be part of IBM’s incubator program, a way of training early career designers with real world, real business problems to solve. I was selected to be the design mentor for the team, and directed the research goals and provided feedback on the solutions. I prioritized safety and ethics for this project and asked the team to focus on edge cases. I put them in touch with research participants that had atypical experiences with their identities, such as having an identity stolen or changing a gender designation with government ID. Their solution took what they learned about these users’ needs into account—such as not asking for unneeded information in a flow that tracked a person getting a new job and moving cities—while addressing the larger organizational and business constraints.

Building on what we had discovered during the incubator, I began working on a demo prototype to showcase possibilities to our government customers. I expanded the user flow to explore managing multiple identities of one end-user interacting with government agencies, healthcare, and even devices. 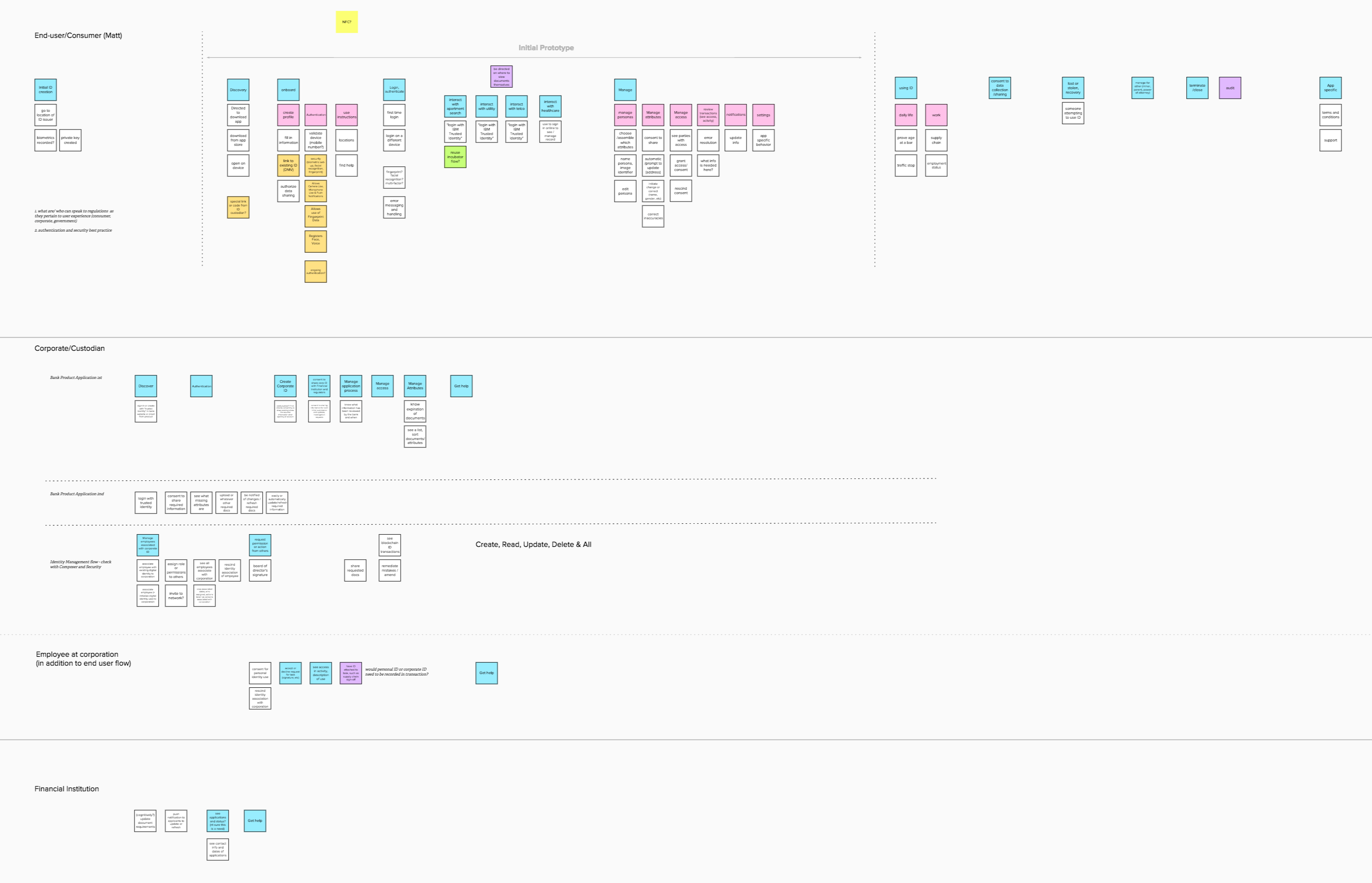 Then I protyped what an “IBM Trusted Identity” application could look like to use in our discussions with customer and inspire an end-user approach.

These explorations were important because it illustrated the complexity of the relationship between organizational needs and end user motivations—they most certainly did not always line up. The prototypes allowed customers to see the interactions from an end-users point of view, and the need to adopt a user-centered approach while solving for their organizational cost reduction and security imperatives.

Because of this, we were able to gain support for this approach and received invitations to run design thinking workshops for multiple potential clients at once. The biggest workshop I ran was in Singapore, for 4 major banking institutions. It was critical for them to be in the same room and become aware that they all had very similar points of friction and customer needs, ideating together and identifying where cooperation and consortium building could improve their business. 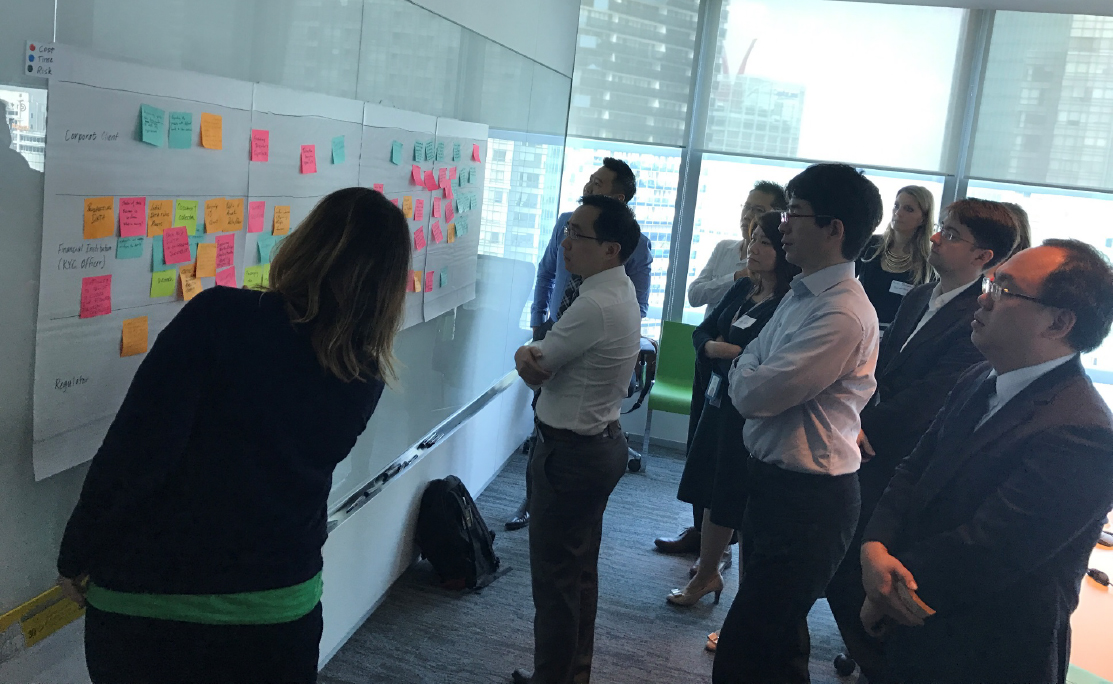