It was a huge cultural change when I joined Consensys. Being a blockchain company, we attempt to walk the walk of decentralization and autonomy by striving to be flat and holocratic. Coming from the mutli-layered hierarchy of IBM, I witnessed a whole new level of transparency and openness that I found exciting. People were empowered to explore and experiment quickly, question everything, and inspire each other.

This also meant that traditional modes of management—“command and control”—simply didn’t work. I saw new people coming in, who had been executives at large companies previously, receive huge backlash when they attempted to manage anyone, or tell them what to do.

Design quality needed to be raised, but there was no design culture nor pathways to leveling up. Projects that did have a designer were visually attractive but unusable. The designers at Consensys when I arrived were geographically siloed between a couple of offices and mistrusted their colleagues (several instances of stealing design work by non-designers when files were left on the shared drive). Many attempts had been made to kickstart a design culture—group calls, a design resource repository—but nothing had really stuck. Designers didn’t really know each other, or how they could help each other.

With newer designers joining, I saw a different set of problems: many weren’t used to working remotely and missed the in-person studio experience. They could get lonely and burned out before they even realized what was happening. At the time, there were very few designers in the world who knew what blockchain was, so almost all of the designers I hired were new to the space: they had a steep technical onboarding hill to climb.

Coming in and being like “this is how it’s gonna be” would land me right on my face. Forcing change wasn’t an option, but something I wouldn’t have wanted to do anyway—that strategy rarely results in lasting change. The designers were hard-working and smart, but had no one to advocate for them. My hypothesis was that if I provided design leadership as a service, created systems that encouraged good design behaviors and hygiene, and built relationships between designers, then we could create a design culture that produced great design.

Part of the solution was simply intentionally creating cross-pollinating situations and opportunities that would happen organically if we were in person. The first step was bringing in and demonstrating the value of collaborative software, like Zenhub for transparency of tasks, Mural for thinking together and low fidelity design, Invision and eventually Figma. Next, I created communication structuring so that people would become passively aware of new ideas and each other. I set up slack channels for topics we needed to drive awareness of, like design research and critique, a google group and internal newsletter, and places people could see each other’s work (drive file system, Invision access, and even our Dribbble). 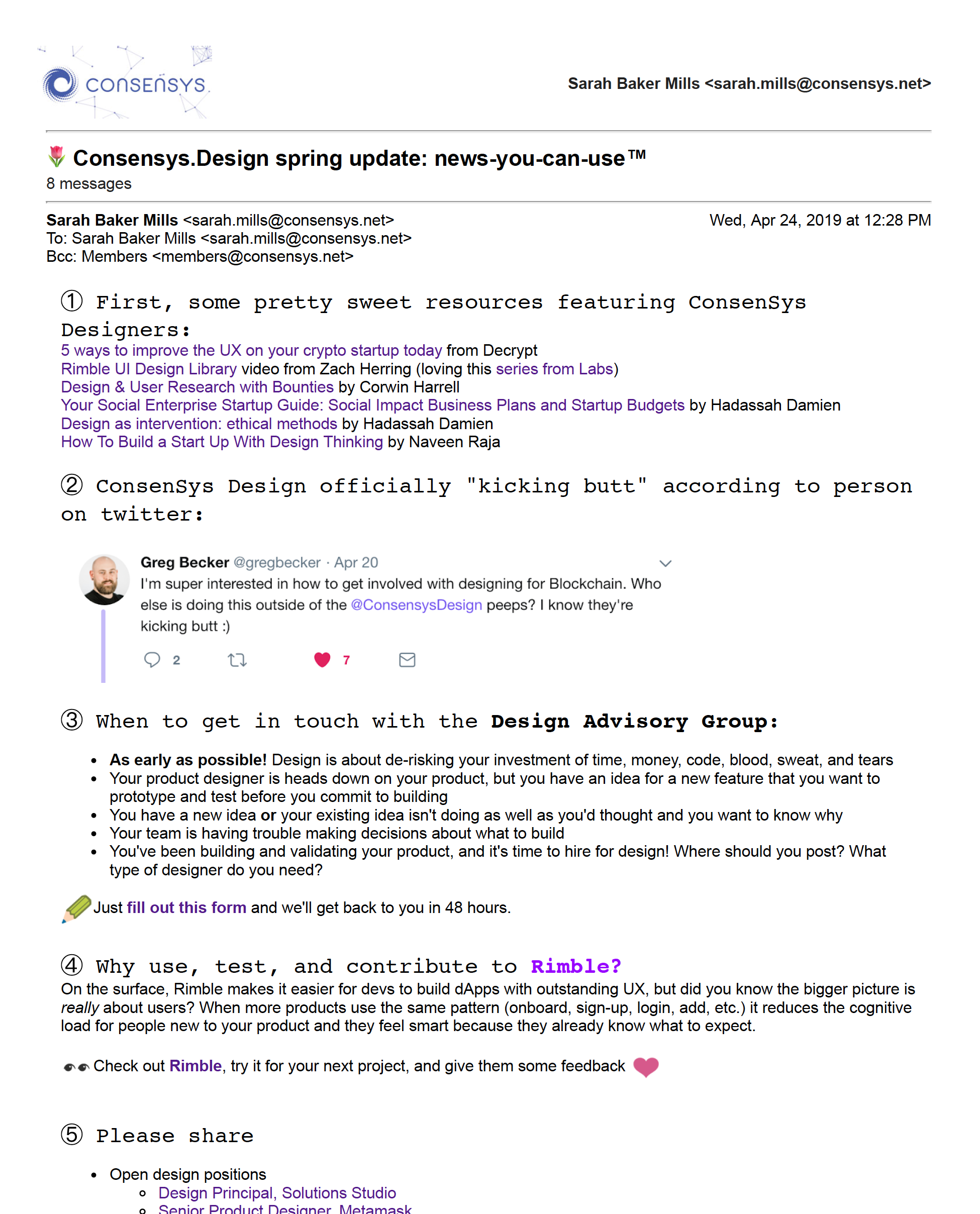 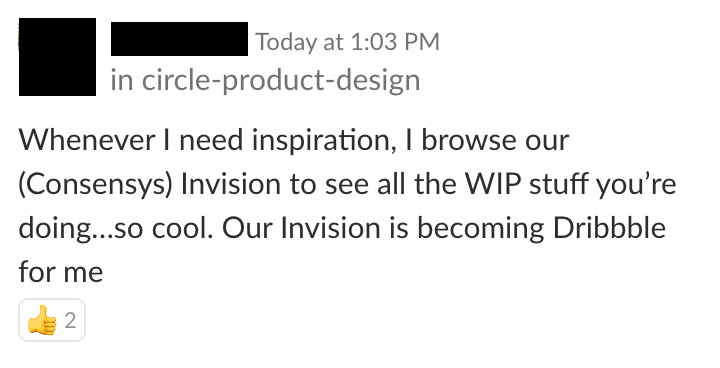 Because we were beginning to track work in Github, it is also where I chose to place most of our documents. My reasoning was that this was an easier pathway for designers to get exposure to versioning and Github, something they would need when working more closely with their teams. The transparency was vital: everyone needed to have a say and the opportunity for awareness for what would eventually become our “agreement process”: not only our best practices, but how do we decide who gets hired, fired, promoted? The rules we governed ourselves with needed to be clear, intentional, and agreed to by everyone.

Safety and being your whole self

Building trust and safety was critical to raising design quality. If people did not feel safe asking for feedback, actively seeking it out, then we were lost. Much of this was demonstrating behaviors first—being open about what I didn’t know, asking lots of questions instead of jumping to opinions, and over-communicating in slack. I found lots of people were afraid to admit they didn’t understand something about blockchain, that they “should” know these things, and it prevented them from participating. Reframing everything we did as an “experiment” where nobody fully understood everything helped people start asking questions, which in turn made others more comfortable to ask theirs. 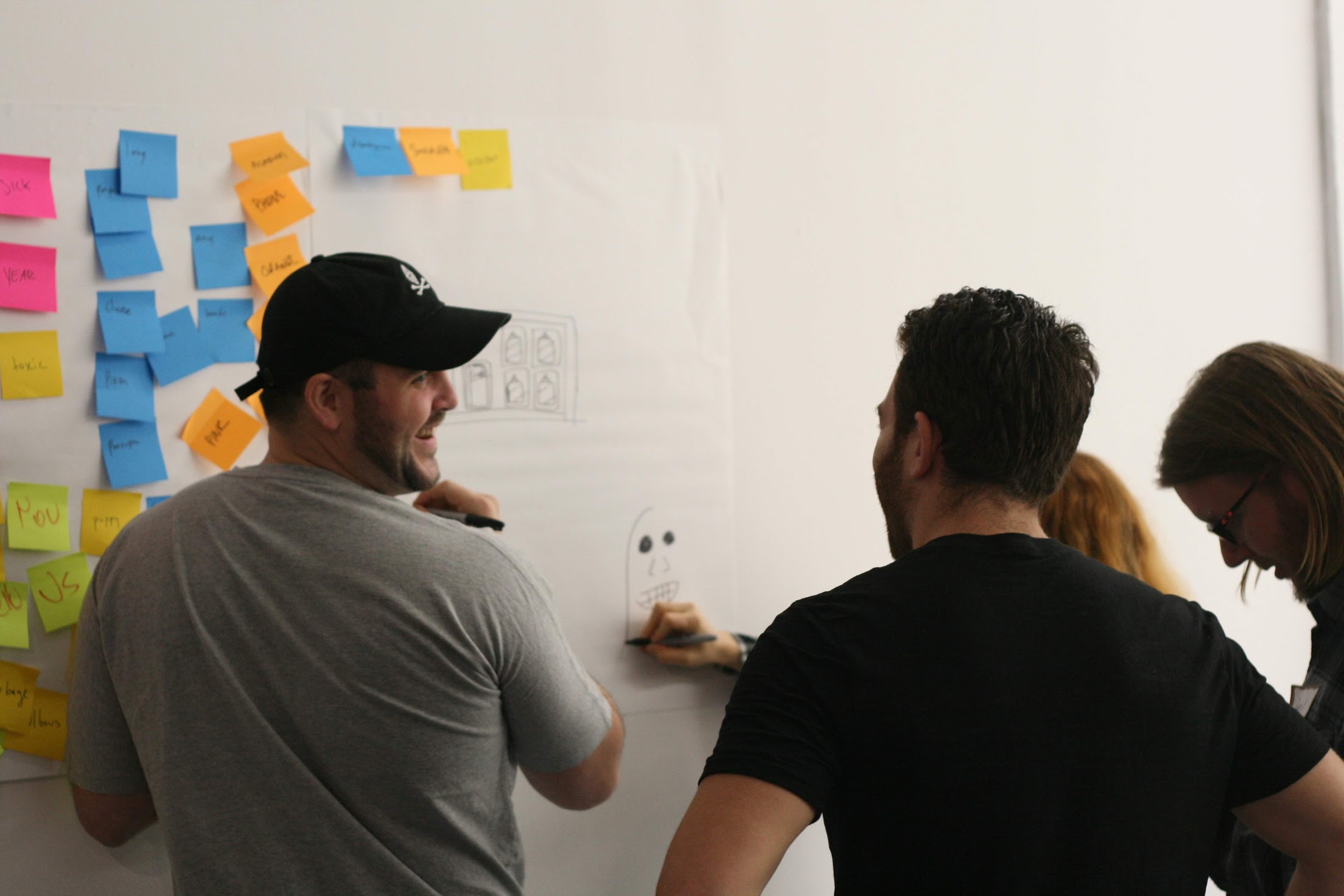 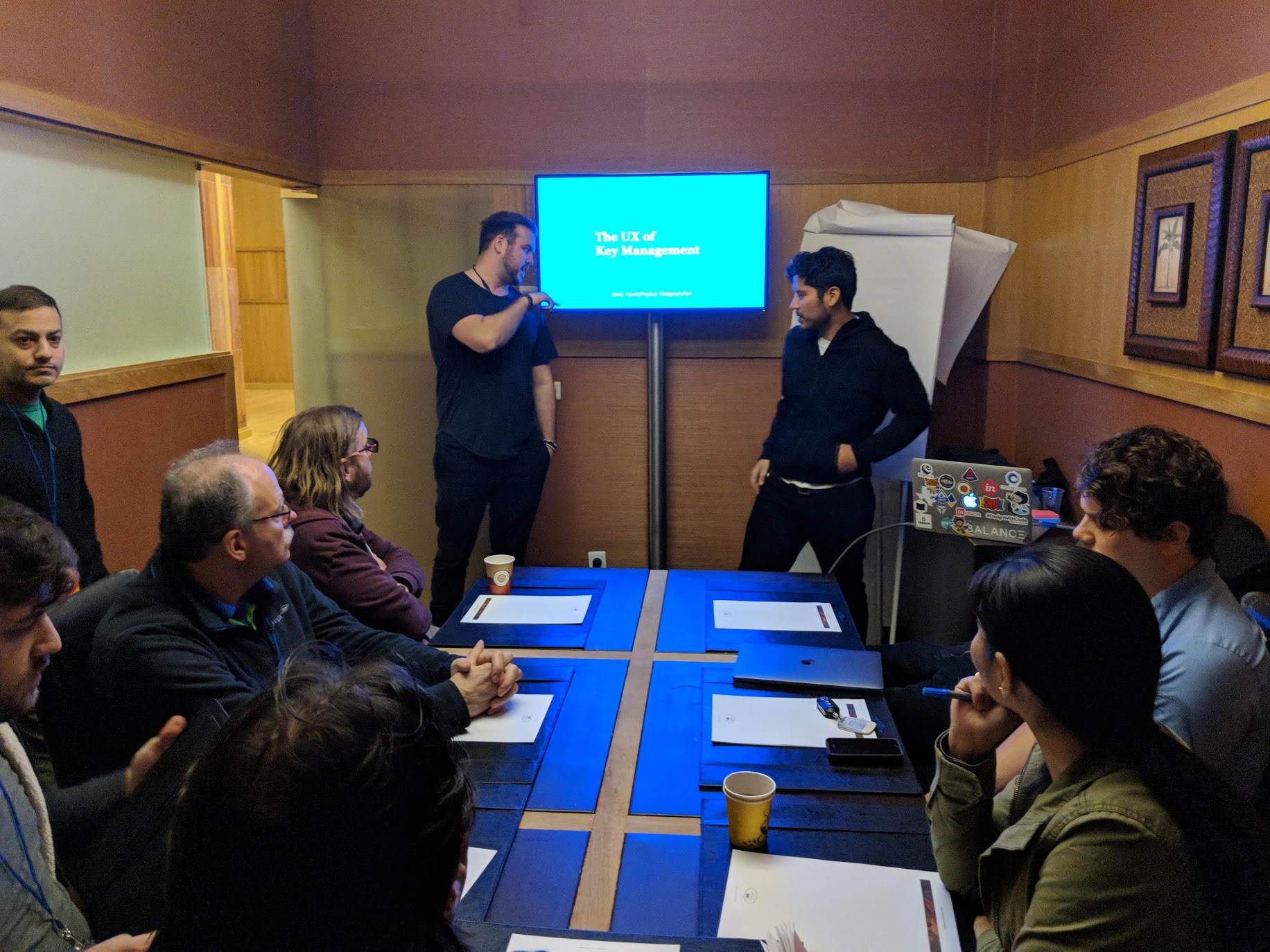 Over time I found that different designers had preferred modes of communication in which they were more likely to share—many were introverted or disliked speaking up during video meetings. I increased one-on-one time with them, and asked if it would be ok if I shared their ideas if they weren’t comfortable. When I visited global offices where designers were, I always made sure to take them out to dinner and spend time face-to-face. Once individual 1:1s with every designer became impossible due to scaling, I set up “Design Therapy” hours where we could discuss things like interpersonal challenges on teams, career progression, and just feelings about work.

When I began building the onboarding process, I knew it would be important to set expectations about the level of chaos in the space (again, since we were upfront about this in the interview process) and normalize self-care in the face of so many exciting challenges and problems to solve. The process involved 30-60-90 check-ins, an assigned design friend, and placement in a critique pod. 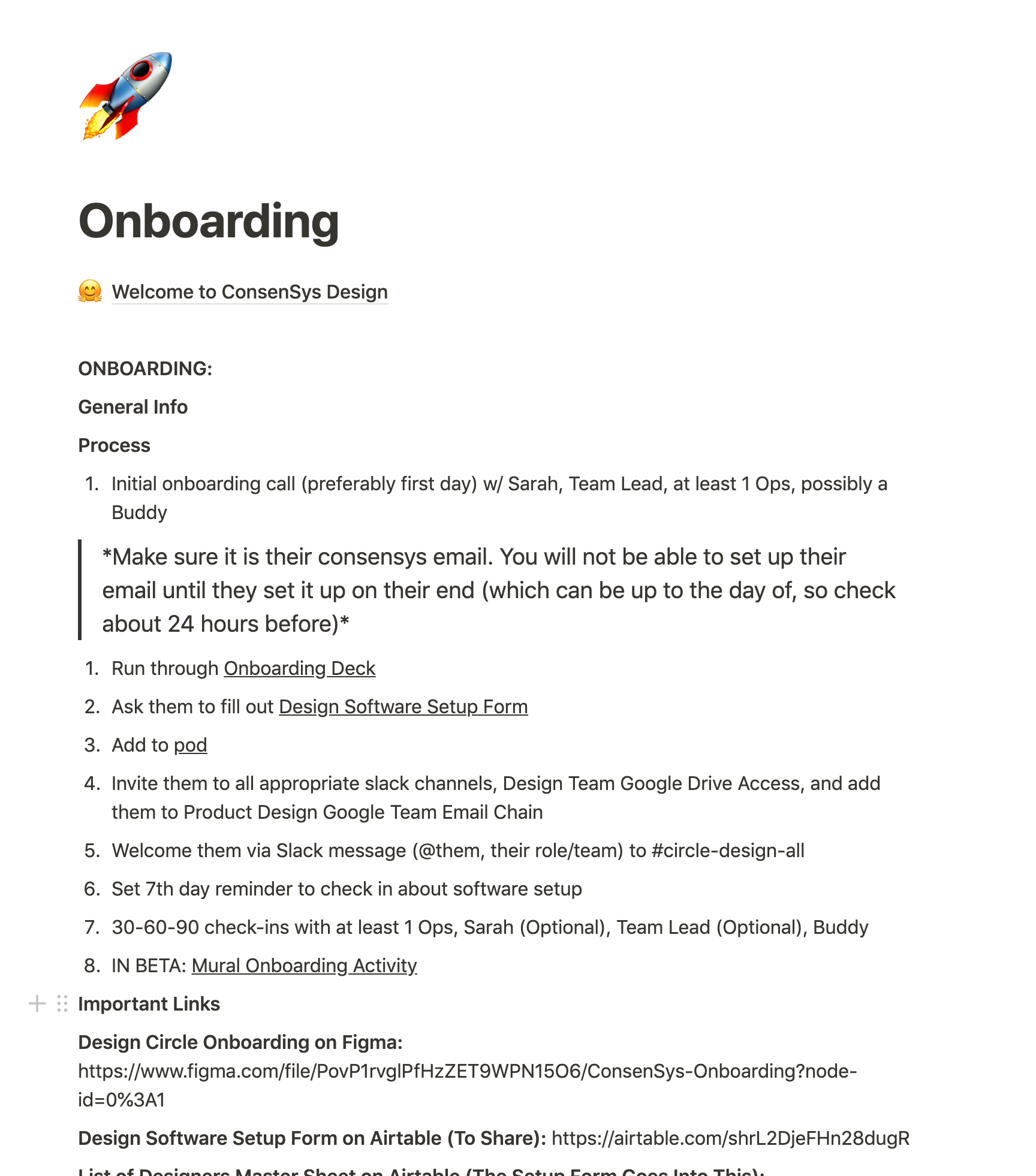 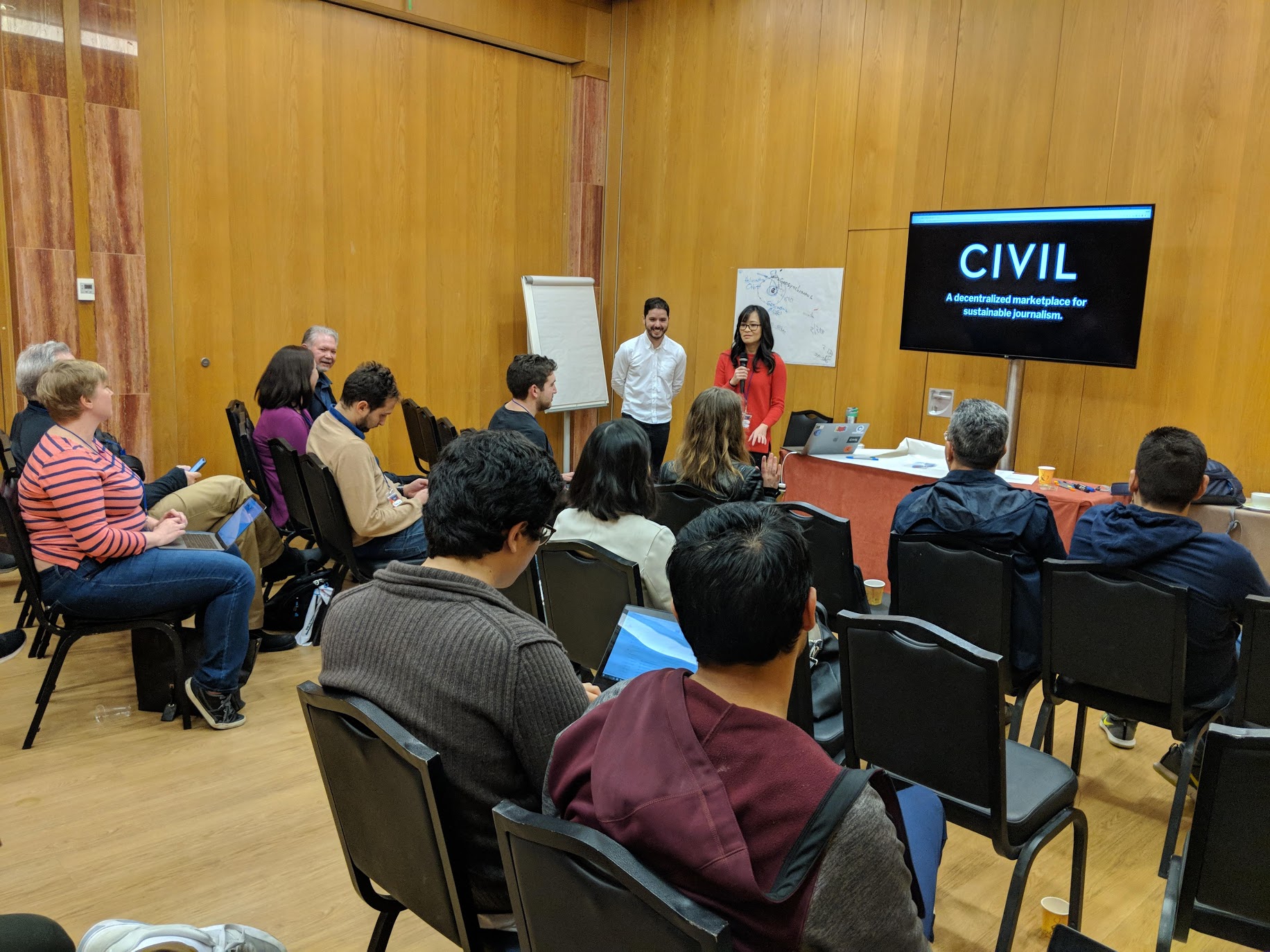 Beyond arguing the case and winning an education budget for designers to take online courses or attend conferences, much of our teaching would need to come from internal sources. We hired design and research leads known for their educating abilities, some even having syllabi and courses they’d built to teach designers research, content design, or design thinking. These hires developed internal programs and eventually opened them up internally to non-designers. Much of the content developed we’ve repurposed into a course on designing for blockchain applications after an overwhelming response to the webinar we trialed in December of 2019.

A couple of the designers at Consensys when I arrived were quite junior, with no background in design. Ideally they would be on a team with a much more senior designer who could give them the growth and guidance they needed in a focused way. However, most lead and senior designers were slammed with work and couldn’t make a huge commitment. I set up a system where the juniors would rotate every 3 months being partnered with someone senior—this meant the senior designer could volunteer for a 3 month rotation when their workload was lighter, and the junior got exposure to many different design problems, teams, and working styles. 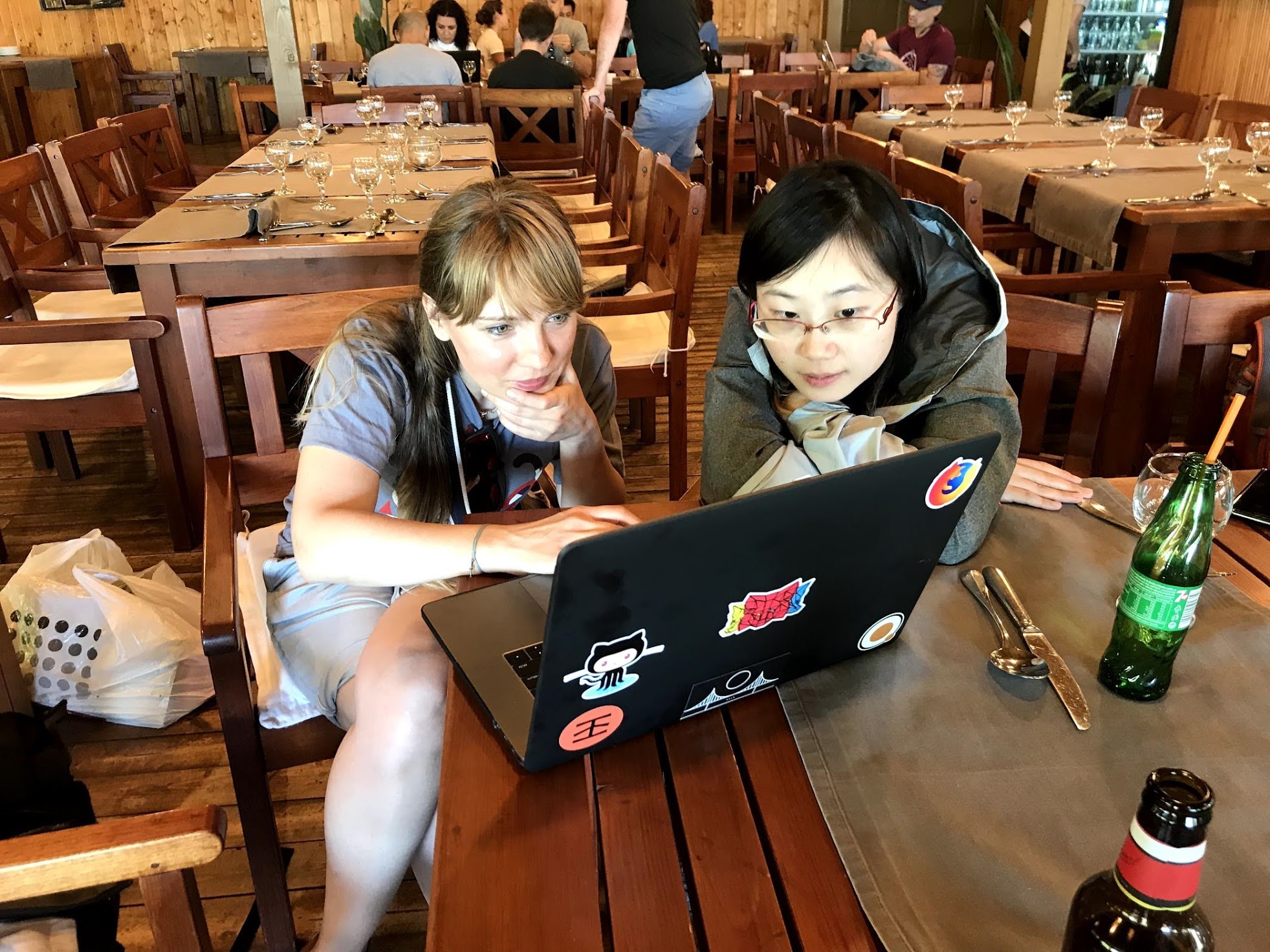 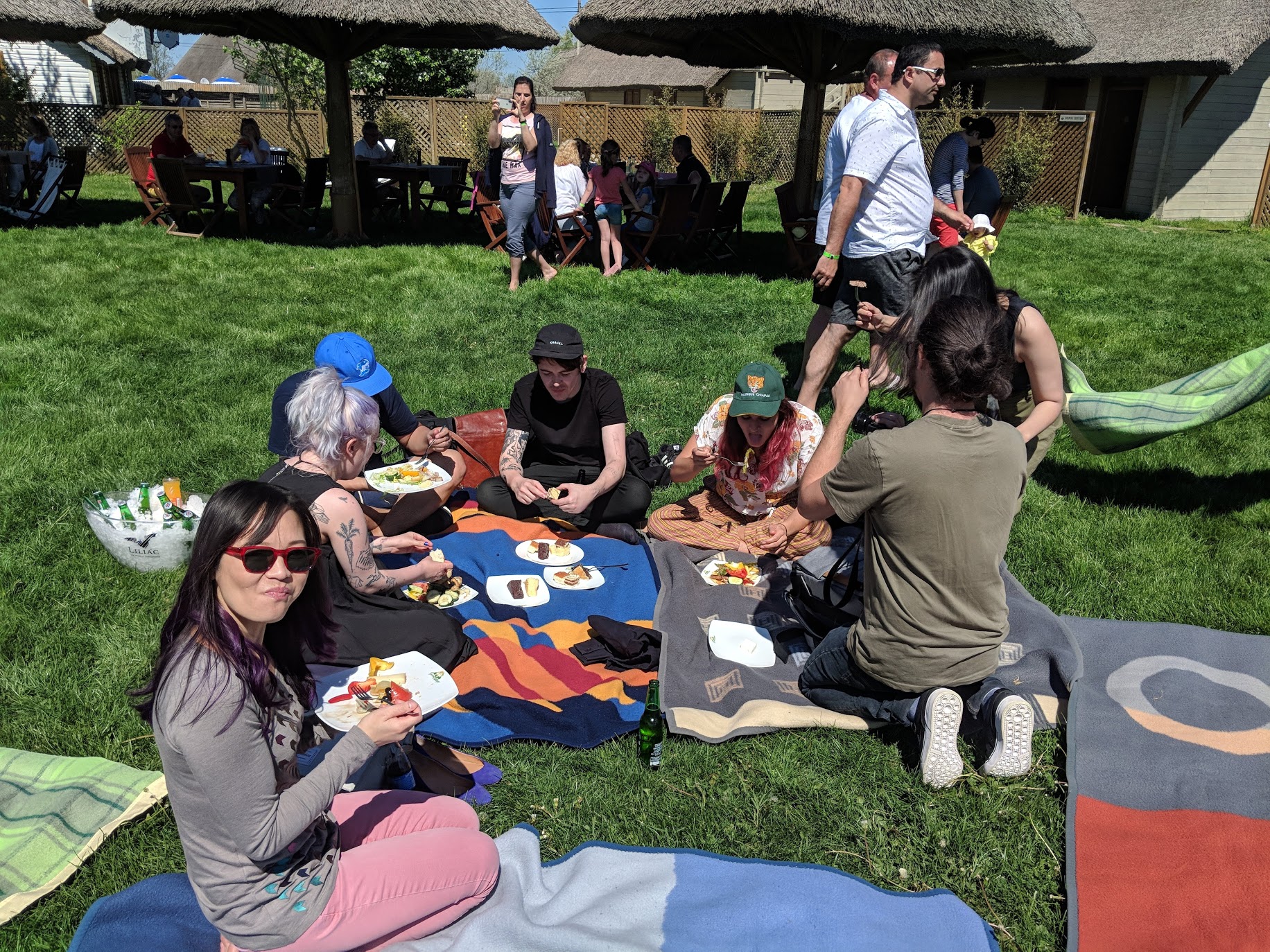 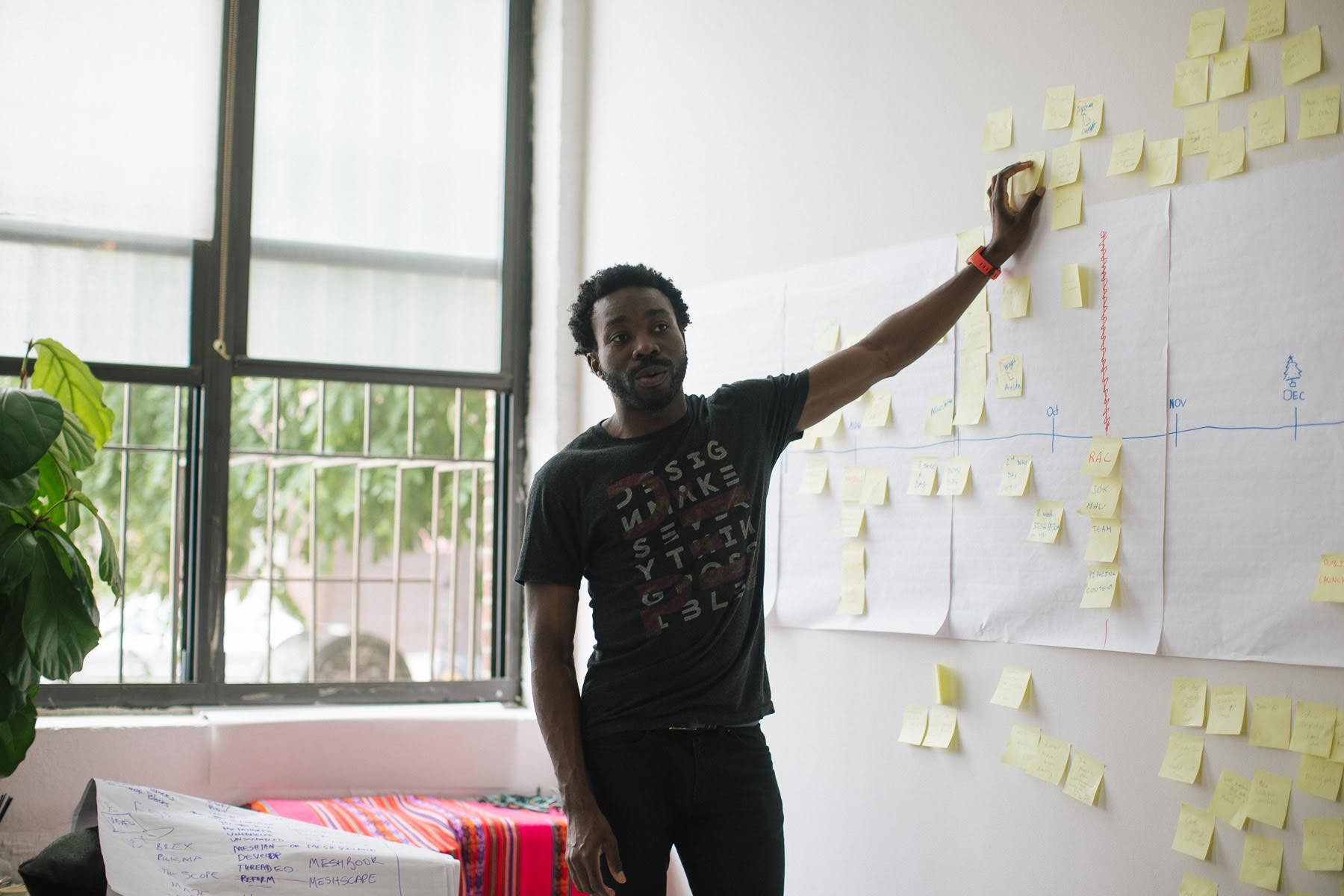 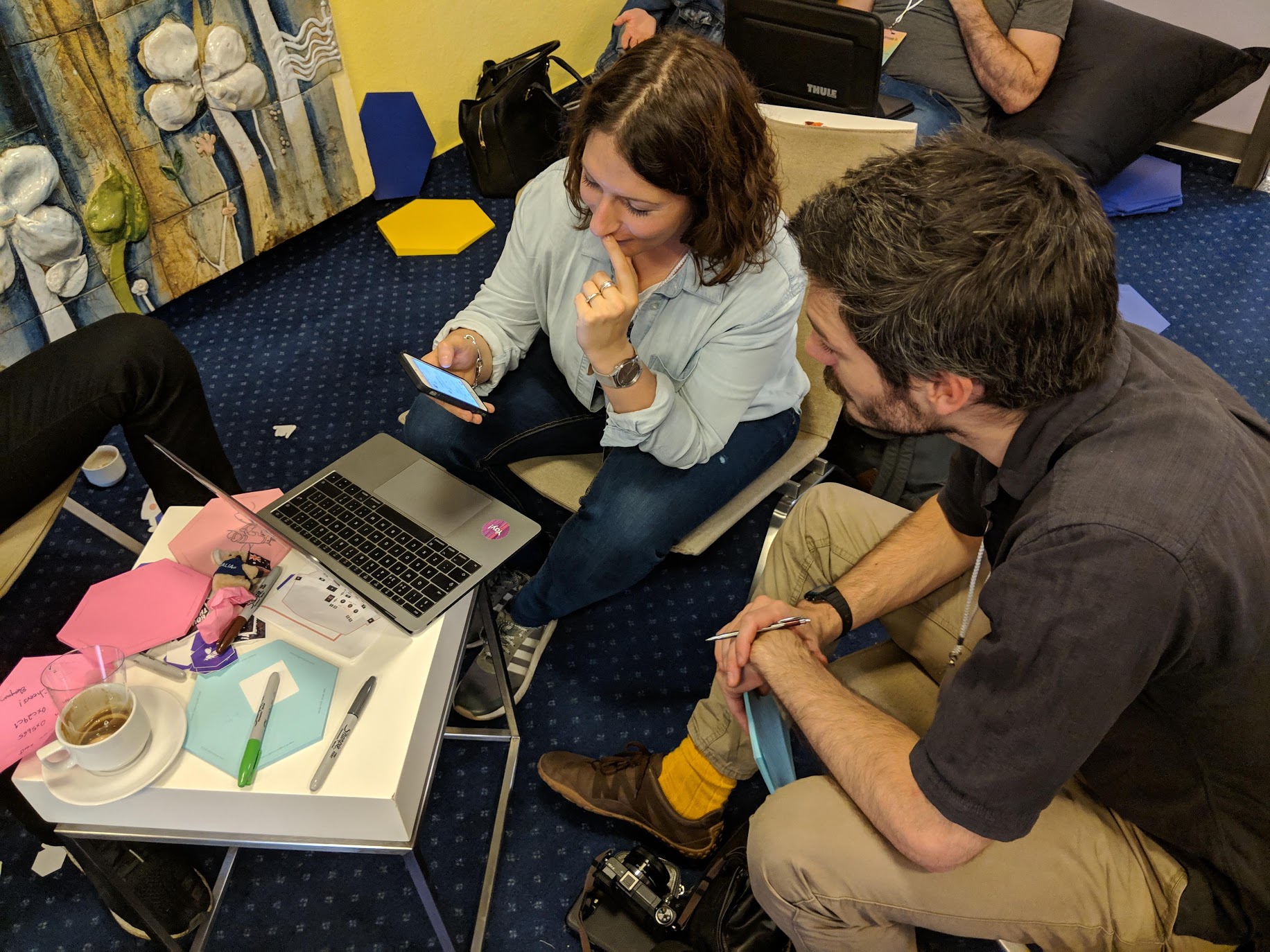 For the more senior designers, most of them wanted their growth to focus on leadership. In addition to the mentoring and pod leadership, seniors and leads would rotate through leading the hiring process for a team that needed a designer.

At one point I was asking a designer for feedback on what I could be doing better, and he mentioned that he was able to go to an office with other designers because he lived in a city with one of our offices. While there, he could get into much deeper conversations on complex topics, and that he felt that was missing for many of the remote team members. I had observed this as well on global office visits—designers could explain things to each other as only another designer could, but it would be occurring in a break room or during a lunch outing. He was curious if we might find a way to reproduce these deeper conversations. We experimented with and eventually adopted a pod model: no more than 3-4 designers in reasonably adjacent timezones, with a meeting cadence of their choosing to have these deeper conversations.

One of the biggest aspects of design cultures I enjoyed in my career was the amount of inspiration I found in my colleagues. It’s harder to do when you can’t just walk past someone’s work area and see what they’re up to, so Consensys Design needed intentional inspiration opportunities. Over time we built 2 types of design shares. The first is a more formal monthly presentation design walkthrough with our company founder, which was recorded and shared with the rest of the company—intended to both get more visibility for design process and outcomes, but also a good opportunity for a designer to refine work to put in their portfolio. The second is the informal, work in progress design share, where no preparation is done beforehand and the designer just talks through what they’re working on that day. 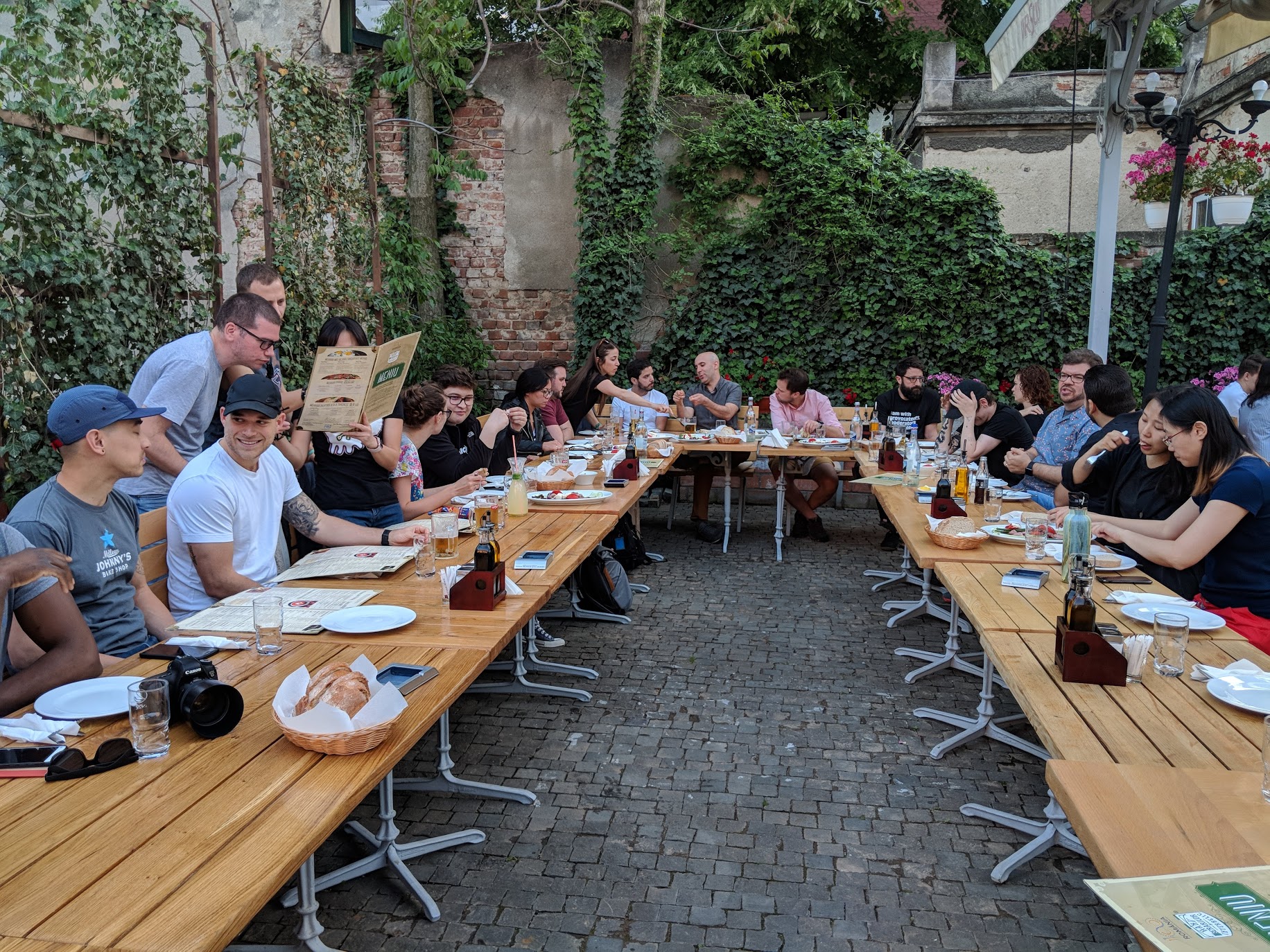 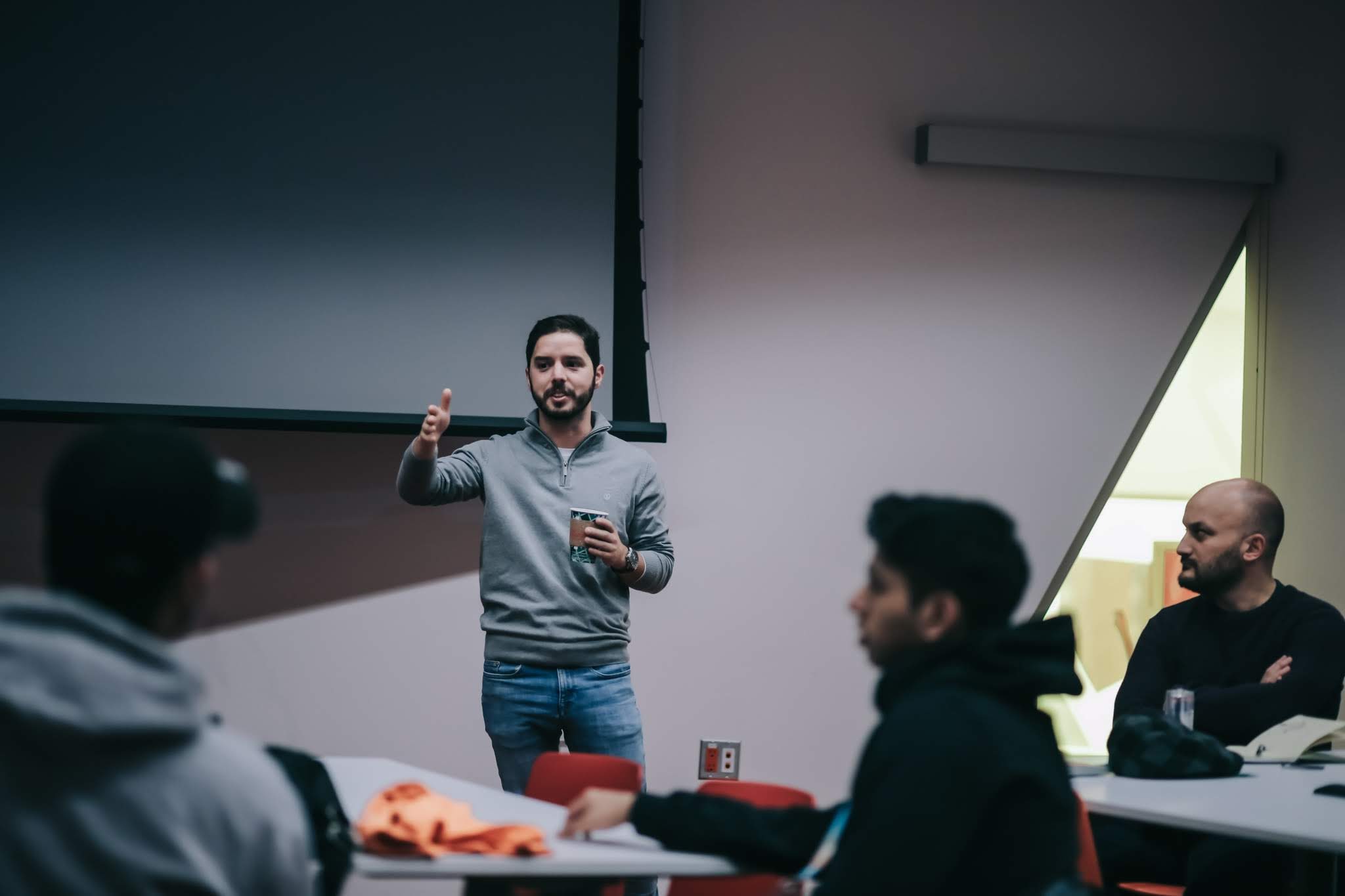 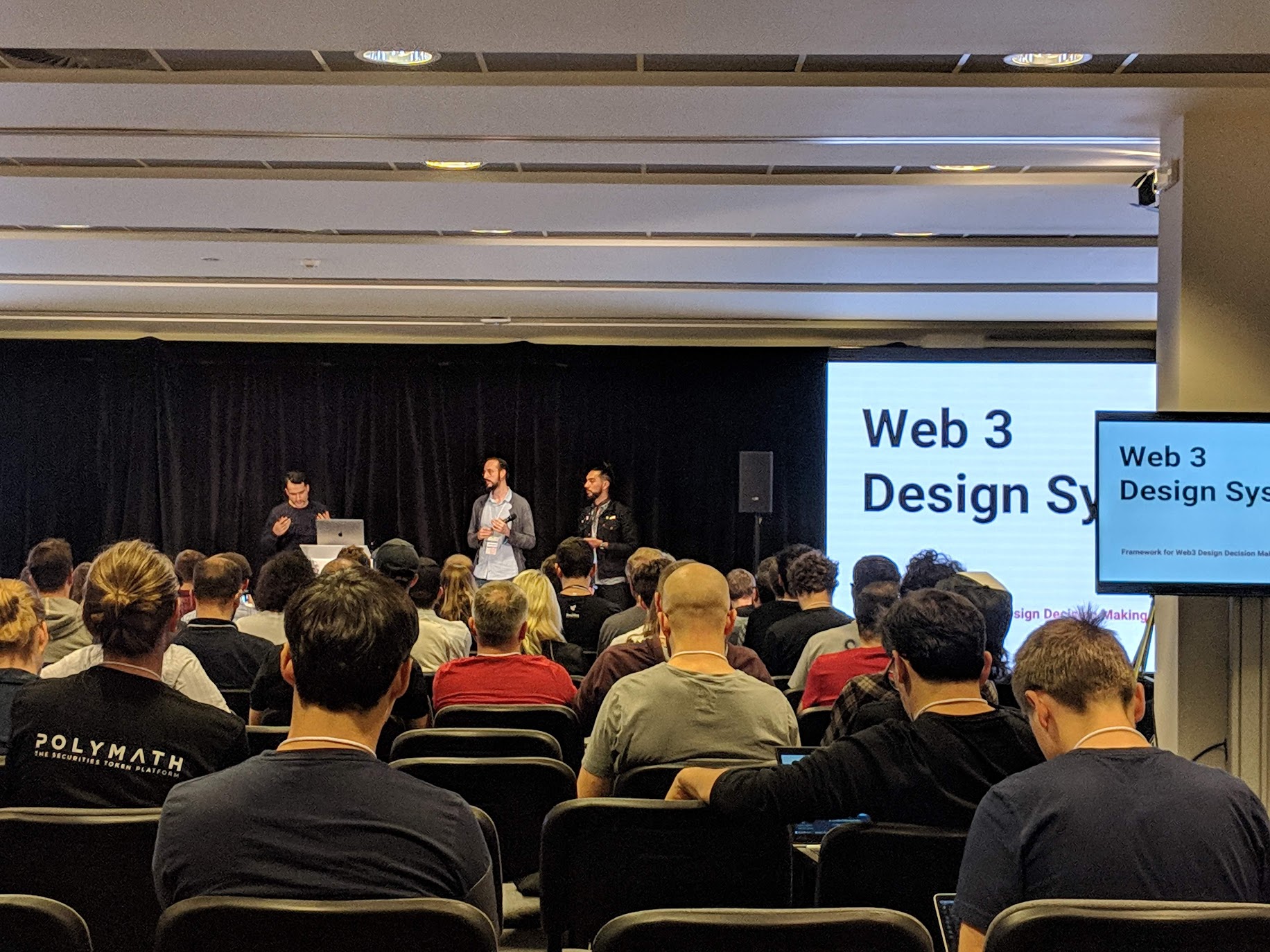 To increase cohesiveness, I held a remote, 24-hour design jam. This allowed designers to get to know each other better and blow off some creative steam.

A few months later, I planned and held an in-person retreat in Romania (the most cost-effective location for a group of global designers). Teams ideated new ways to extend design thinking for blockchain, leveled up on their technical understanding, and grew closer—I noticed a sharp uptick in sharing and helping each other across teams after this. Additionally, with the increased technical knowledge, designers felt more confident to begin speaking at events and being more vocal on their teams when advocating for users. 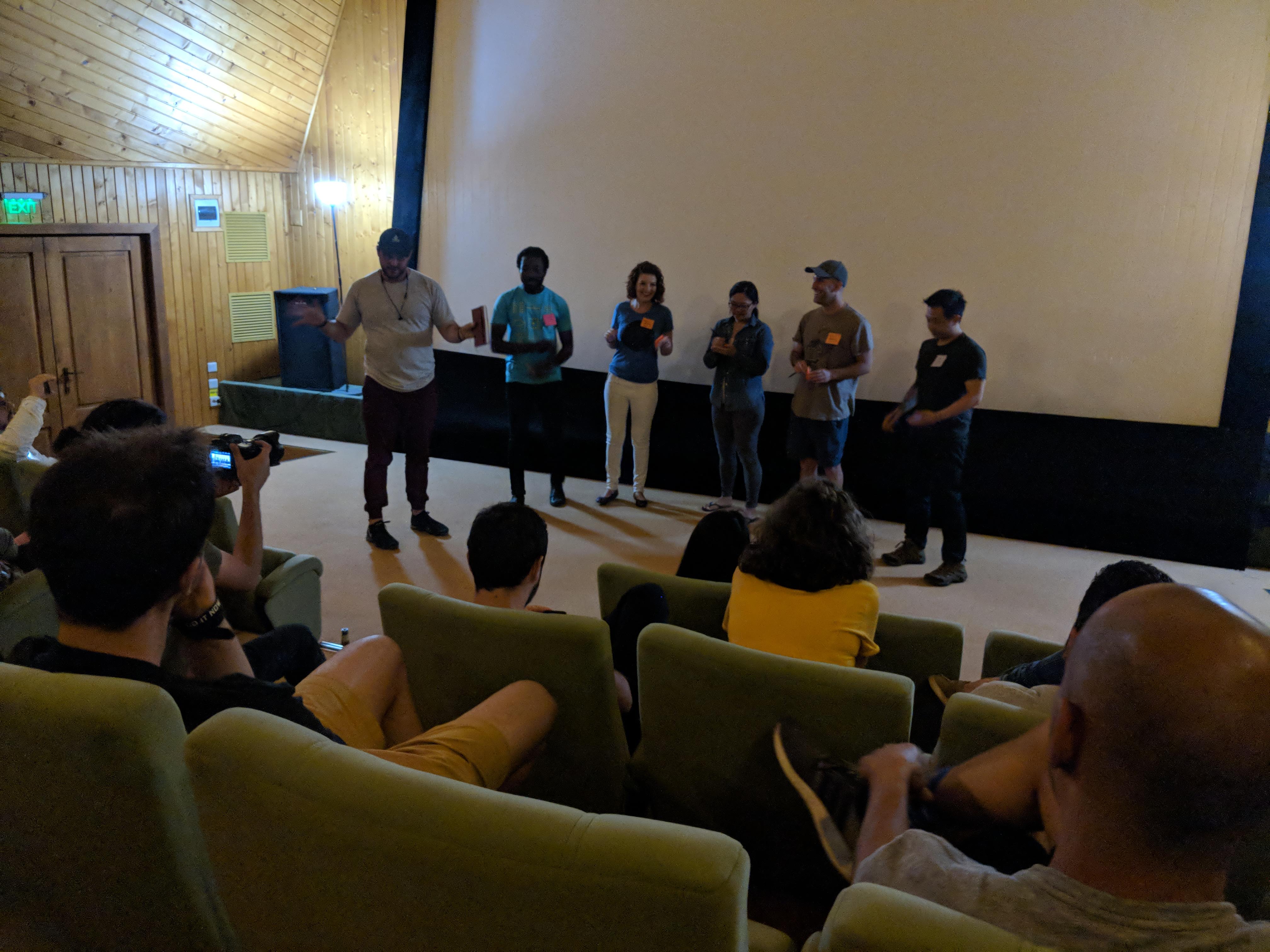 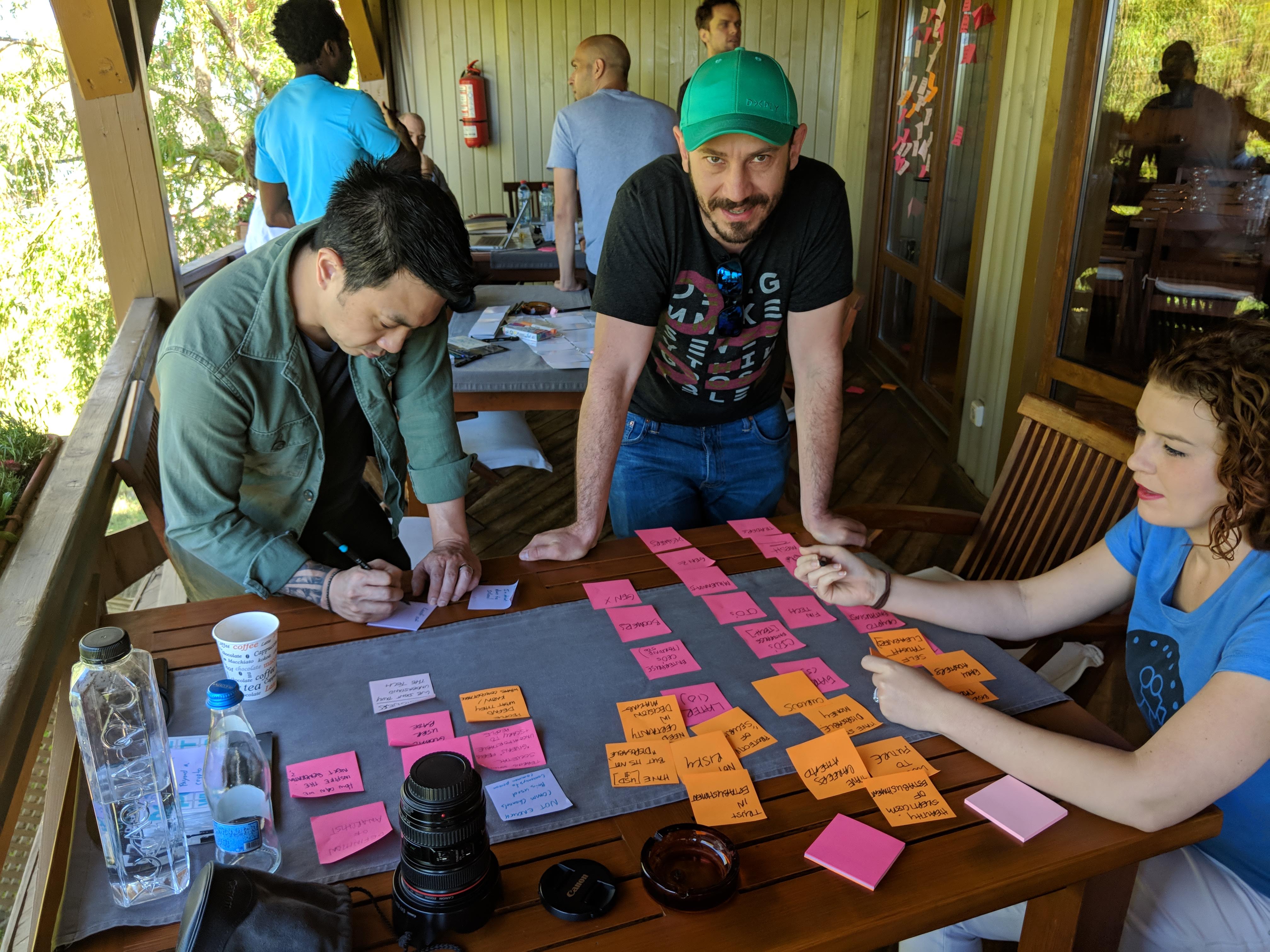 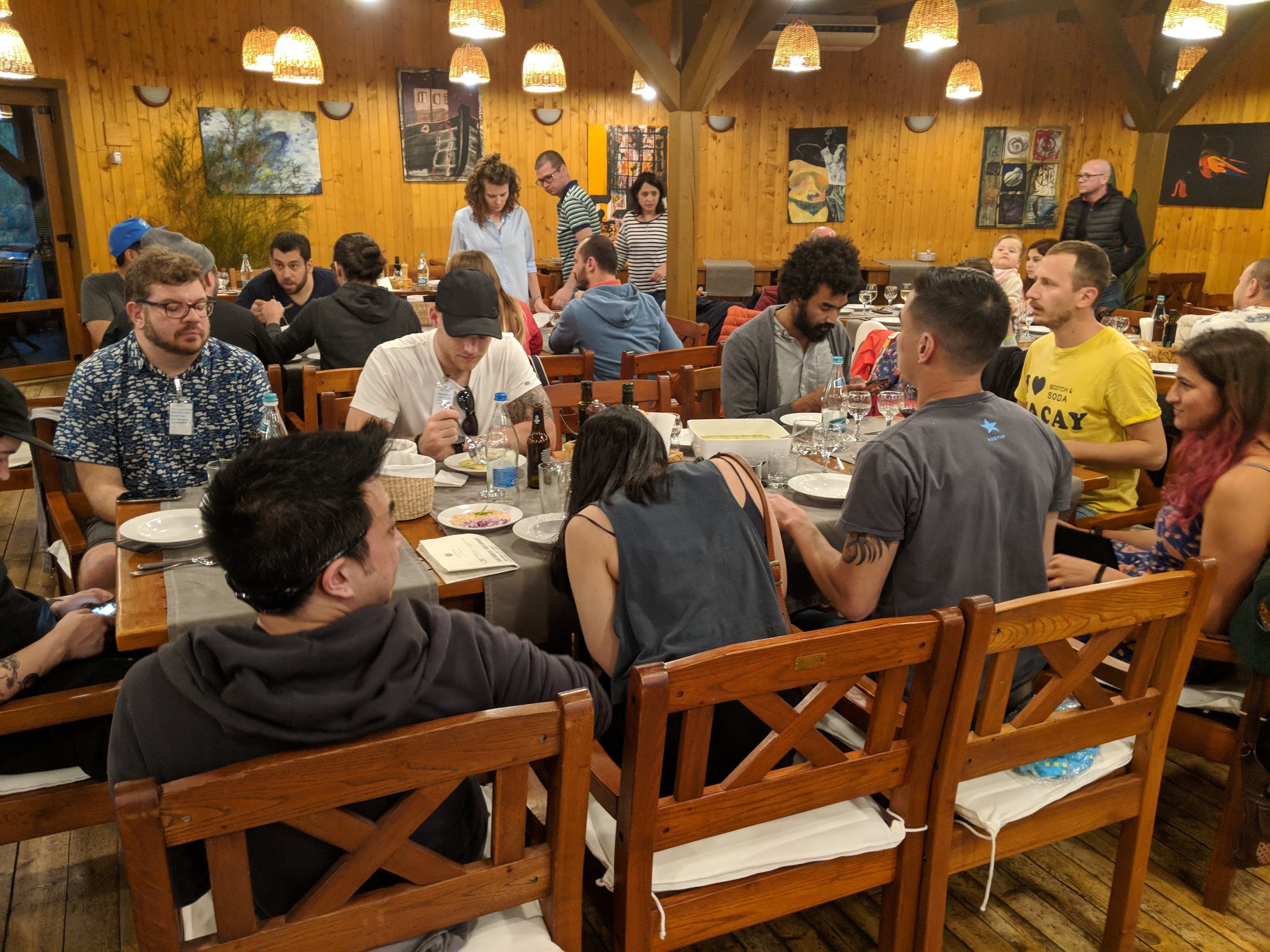 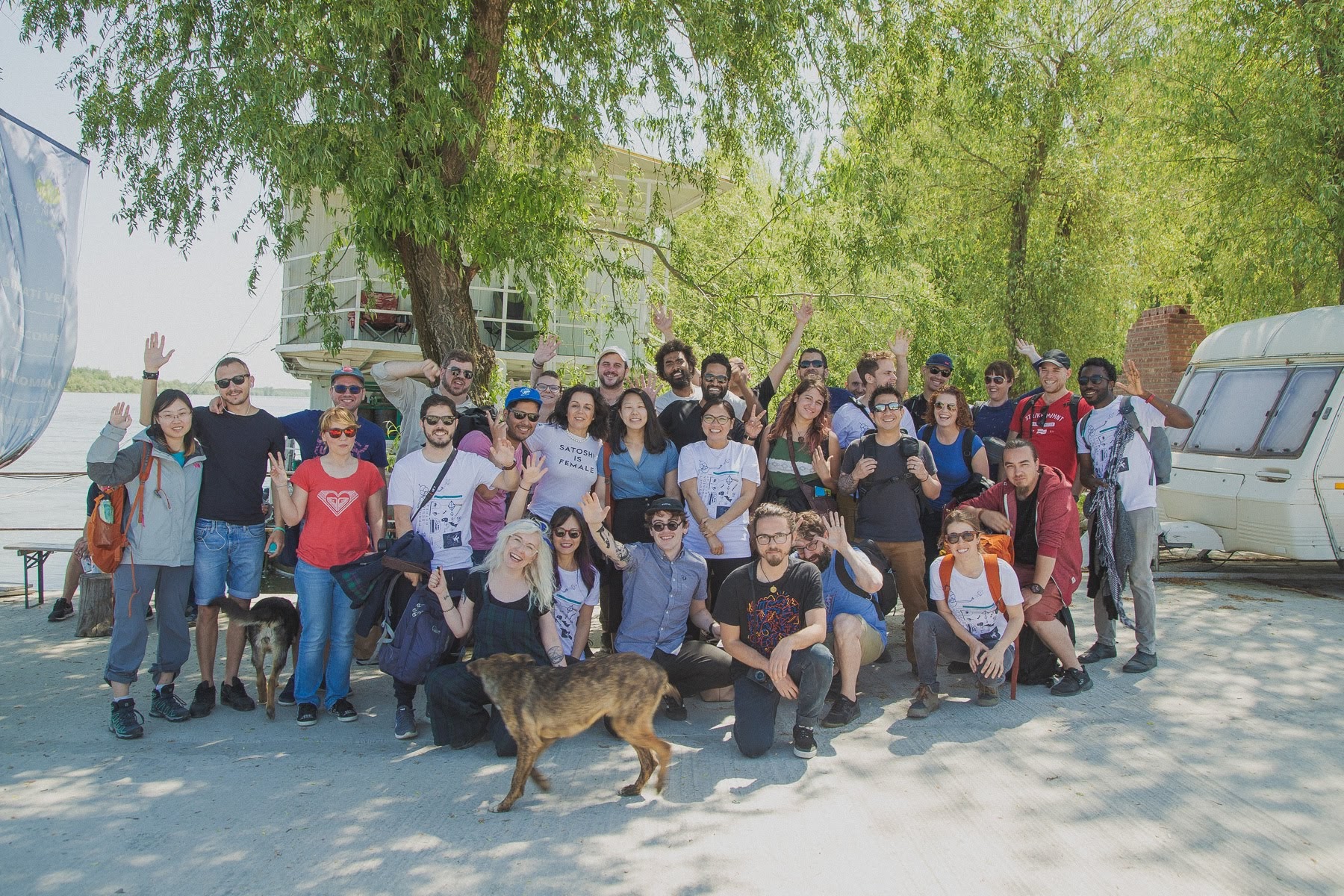 The most tangible outcomes for our design culture is that we had a 100% candidate offer acceptance rate and a 100% retention rate from November 2017 to December 2018. The fuzzier outcomes were mostly in observation and feedback—designers reported being happier and the quality of design improved exponentially. Designers helped each other, built on each others’ work, and the pod format thrived.

Design began to have a reputation of inclusion, getting things done, and fun—we often had non-designers asking to join our channels and events. Other groups like Finance and HR began requesting design process help, and UX became significantly more prominent in an engineering led company.